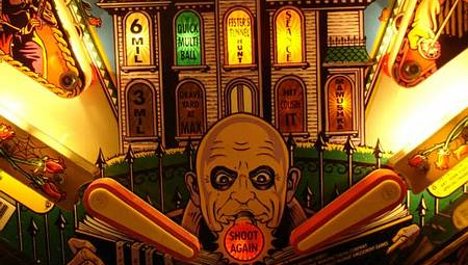 Remember that elusive extra ball? Or that strange sound coming from somewhere inside after you reached the score for another game?

If so, you’re likely old enough to have spent some time behind a pinball machine. Called “flipper” in German after the two little pads used to keep a metal ball in play, they hark back to a time before video games dominated living rooms and when no night out at the bar was complete without playing a round or two.

Of course, pinball wasn´t just about fun – it involved plenty of skill. Pros often trapped the ball with the flippers, and some even nudged the entire machine to influence its course. Too much “nudging” led to the infamous “tilt” warning, which could trigger a stop-mechanism that would prematurely end your game.

But the onslaught of the digital era has threatened to end the game permanently, as pinball machines have slowly disappeared from drinking holes and arcades over the years. And that eventually encouraged Axel Hillenbrand and Harald Fleischhauer to start their own basement collection.

“We started with a few machines that we really liked, like Black Knight 2000 and Indiana Jones. But soon there were more and more,” remembers the 40-year-old Hillenbrand.

At first, they were only plugged in during parties, keeping friends occupied for hours.

“My wife and I threw grill parties during the summertime and obviously we wanted people to hang in the backyard,” says Hillenbrand. “But it was difficult to pull them out of the basement, all because of the pinball machines.”

Putting aside the hurt over his ignored bratwurst, Hillenbrand and his friend kept collecting and have recently opened what they’re calling Europe’s first pinball museum not far from the banks of the Rhine River.

Located in Neuwied north of Koblenz, there are more than 100 machines on display. Most come from the United States, but some were built in Germany and France. The oldest machines date back to the early 1930´s – the beginning of modern pinball devices.

Before that, the game was called “bagatelle.” Players used slanted wooden tables, sticks and pins – an invention modelled after a billiard table by a French jester at the Court of King Louis XIV in the late 18th century. It was first played at the “Chateau de Bagatelle” – hence the name. Hillenbrand and Fleischhauer even have a bagatelle table made in 1899.

But it’s the regular pinball machines at the museum that are fully operational. Visitors, however, might be surprised to find the house currency is still the Deutsche mark.

“Almost all machines were built before the euro came into circulation,” explains Hillenbrand.

But you won’t have to search under the couch for leftover DM1 coins before coming to Neuwied: the proprietors happily exchange euros at the entrance.