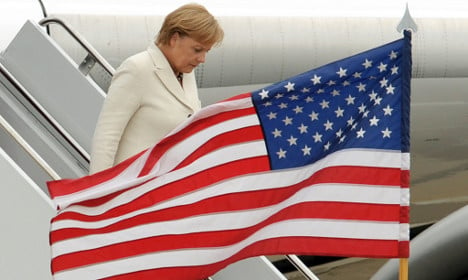 A file photo of the Chancellor arriving in the US. Photo: DPA

Some 40 international leaders will be in Washington for the talks, during which US President Barack Obama is expected to focus on improving relations with China and pushing sanctions on Iran.

Merkel plans to discuss Germany’s particular wish to prevent dirty bombs, which the country fears are more readily accessible for terrorists than nuclear bombs, Berlin government sources said. She is also scheduled for a bilateral meeting with Obama.

The summit is a highlight in Obama’s new more restrictive nuclear weapons policy, unveiled the first week of April.

At the time German Foreign Minister Guido Westerwelle welcomed the policy, calling it a “courageous step towards disarmament,” in an interview with daily Bild.

Obama’s Nuclear Posture Review said that Washington would only consider the use of nuclear weapons “in extreme circumstances” to defend its vital interests.

In a major policy shift, it said for the first time that states without atomic weapons which complied with non-proliferation treaty obligations need not fear a US nuclear attack.

However, Obama warned exceptions could be made for “outliers” Iran and North Korea, both of which are suspected of trying to acquire a nuclear bomb.

Westerwelle said the announcement gives hope for further cutting the number of US tactical nuclear warheads and “even the total withdrawal of these weapons from Germany” – a key policy goal for his Free Democratic Party.

According to experts the United States still has some 10 to 20 nuclear warheads stationed in Germany.

After the summit Merkel will travel to California, stopping in Los Angeles and San Francisco. She plans to give a speech at Stanford University, and will return to Germany on Friday.