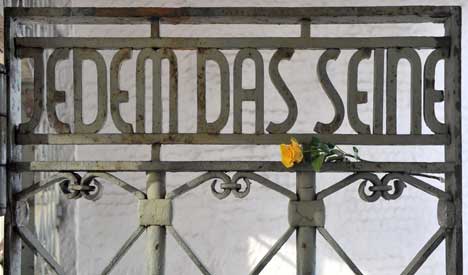 “The majority of my comrades are dead, they are no longer with us,” said Günther Pappenheim, 84, one of around 90 survivors from the camp near Weimar in central Germany who came to take part in a solemn ceremony.

“But we have the great wish, the great request, that the memory of the victims of fascist terror, that the comrades who lost their lives in Buchenwald, live on our hearts … and are never forgotten.”

Although technically not an extermination camp, all of which were in German-occupied Eastern Europe like Auschwitz in Poland, Buchenwald, high on a wooded hill called the Ettersberg, was still a place of immense suffering.

An estimated 56,000 people from all over Europe died between 1937 and 1945, starved and worked to death in horrendous conditions, killed in medical experiments or summarily executed.

They included some 8,000 Soviet prisoners of war killed by “Genickschuss” — a bullet in the back of the neck. Others prisoners were sent eastwards to the gas chambers or perished in “death marches” in the final weeks of the war.

Around 250,000 people were imprisoned in Buchenwald between 1937 and 1945 and in its 136 nearby sub-camps where prisoners carried out forced labour in factories for the Nazi war effort.

They included Jews, Roma, Sinti, gays, the disabled, Jehovah’s Witnesses and real and imagined political opponents of Hitler from all over Nazi-occupied Europe including France, Ukraine, Poland and the Netherlands.

When the horrified Sixth Tank Division of the Third US Army arrived at Buchenwald on April 11, 1945, they found 21,000 inmates, many dangerously emaciated. Also there were 900 adolescents and children, some as young as four.

A week earlier, the Ohrdruf sub-camp had been liberated by the 89th Infantry Division, which included US President Barack Obama’s great uncle Charlie Payne. Obama visited Buchenwald in June 2009.

After World War II, the Soviet secret police, the NKVD, took over the camp, imprisoning some 28,500 people there until 1950 in inhumane living conditions, mostly former Nazi party members, local officials and police.

More than 7,100 died, their bodies dumped in mass graves.