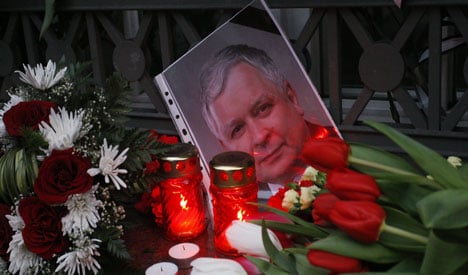 “Poland, we are crying with you,” ran the headline on the front page of the mass-circulation Bild am Sonntag, which devoted its first eight pages to the tragedy, with a full-page picture of the crash scene.

“The tower said ‘Nyet’, so why did the presidential plane go ahead with its tragic landing in the fog?” asked the paper.

Bild also runs an interview with Polish-born German striker Lucas Podolski, who said: “In me beats a Polish heart. This is a huge shock for me. When such a catastrophe occurs, you realize there are more important things than football.”

Podolski and several other players took to the field with black armbands for Saturday’s Bundesliga matches.

In an editorial entitled: “Like a dagger in the heart”, the Tagesspiegel am Sonntag paid tribute to Kaczynski’s legacy, but did not shy away from his occasionally prickly nature.

“This small man, who often infuriated (German Chancellor) Angela Merkel and other European leaders with his mixture of provinciality, unpredictability and cunning, nevertheless achieved great things in Poland,” the paper said.

In comments to Bild, Merkel herself recalled personal memories of “hours of warmth and friendship” with Kaczynski during a stroll through the woods near the northern Polish city of Gdansk accompanied by their partners.

Meanwhile, the Welt am Sonntag concentrated on the “cynical twist of fate” that the crash occurred on the way to commemorate the Katyn massacre.

“The big moments in recent Polish history are almost all tainted with blood,” the paper said.