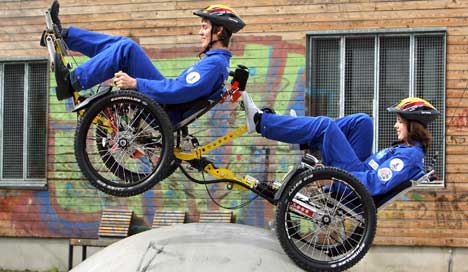 The four-person German team, from the Leipzig-based International Space Education Institute (ISEI), won first prize in the high-school division after a decisive race in Huntsville, Alabama on Saturday, NASA announced.

Stefan Martini from Munich and Stephanie Fleischer from Oberschleißheim, both 19, finished the roughly half-mile course with its twisting curves, gravel pits and other obstacles simulating lunar surface conditions, in 3 minutes 37 seconds.

“It was a tough race,” said ISEI director Ralf Heckel. “The first four finishes were only four seconds apart.”

A team from the University of Puerto Rico in Humacao won the first prize in the university division.

The teams beat out more than 70 other groups from 18 US states and Puerto Rico as well as from Canada, India and Romania.

“The Great Moonbuggy Race” recalls the challenges that engineers faced in the late 1960s, when they were designing the original Apollo-era lunar rover, which explored the surface of the moon in the early 1970s.