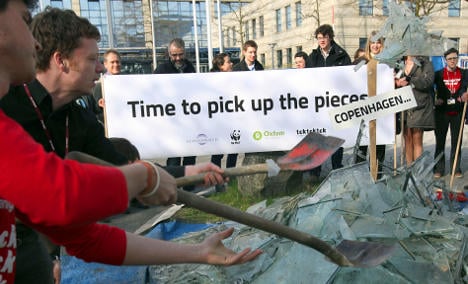 In the first parley since the stormy December meeting, no immediate consensus emerged among the 194 parties to the UN Framework Convention on Climate Change (UNFCCC) for plotting the way forward and the mood was soured by fresh finger-pointing.

Copenhagen damaged “the trust that is necessary for any partnership,” he said.

The three-day gathering in the former German capital takes place nearly four months after a summit that, after being billed as the moment when mankind would rally to fight climate change, came within an inch of catastrophe.

Attended by some 120 heads of state and government, the summit was saved from fiasco after a couple of dozen leaders cobbled together a brief document outlining areas of agreement.

Their “Copenhagen Accord” sets down a general goal of limiting global warming to two degrees Celsius (3.6 degrees Fahrenheit), unites rich and poor countries behind pledges for tackling greenhouse gases that cause the problem and earmarks nearly $30 billion in aid from 2010-2012, with a prospect of up to $100 billion annually by 2020.

Critics say the emissions pledges, at present levels, would ensure warming of four degrees Celsius (7.2 Fahrenheit) or more and in any case are only voluntary.

Others have denounced the accord as a stitch-up between an elite group of countries; more than a third of UNFCCC parties have still not endorsed the deal.

In the quest to revive the UN process in time for the next big UNFCCC meeting, due in the Mexican resort of Cancun in November and December, many countries on Friday endorsed ideas for speeding the laborious, consensus-driven negotiation process.

These include setting up a “contact group” of several dozen countries that would haggle over core issues, then submit the outcome to a plenary for its approval.

“We cannot go back to business as usual,” said a Spanish delegate, speaking for the European Union (EU).

“We need to improve our working methods,” said Fernando Tudela of Mexico, a vice minister for planning and environmental policy.

“This process of negotiations requires adjustment and modernisation without of course using different practises that are used in the United Nations.”

Several left-led countries in Latin America and the Caribbean were unconvinced.

“The total failure of the meeting in Copenhagen… was simply because the principles of the United Nations were not respected, nor were international rules,” blasted Venezuelan delegate Claudia Salerno, who said the “neo-colonialist exercise” seemed set to be revived.

Other issues on the table in Bonn will be how many extra meetings to stage before Cancun and whether attempts should be made to craft a draft negotiating text in the coming weeks.

Outside the venue, half a dozen protestors shovelled shards of broken glass

in a symbolic appeal to the UNFCCC to “pick up the pieces” after Copenhagen.

In Austria, meanwhile, a watchdog group reported that almost 90 percent of the country’s glaciers shrank in 2009, some by as much as 46 metres (150 feet). Eighty-five out of 96 glaciers had shrunk over the past year, the Austrian

“The ice is very thin over large areas, so the glaciers are retreating very quickly,” noted Andrea Fischer of the University of Innsbruck, who conducted the measurements.