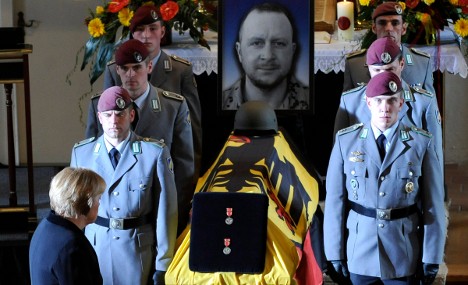 Merkel was joined by Defence Minister Karl-Theodor zu Guttenberg and hundreds of military and civilian mourners at the St. Lamberti church in the Lower Saxon town of Selsingen. Both politicians bowed before the three coffins draped with the red, black and gold German flag and soldier’s helmets.

The chancellor expressed her deep sympathy for the family and friends of the fallen soldiers, saying their loved ones had died for Germany.

“They paid the highest price that a soldier can pay,” she said. “I bow before you. Germany bows before you.”

Merkel also acknowledged that her government had chosen to break the long standing political taboo of calling the conflict a “war.”

“We must look the facts in the eye,” the chancellor said according to public broadcaster ARD. “Many call the mission in Afghanistan a war. And I understand that well.”

“I stand behind the mission in Afghanistan, because it serves the security of our country,” she added, also acknowledging that work there has been more difficult than was expected when German soldiers first arrived eight years ago.

Guttenberg also acknowledged that the Afghan mission is indeed a war.

“What we endured on Good Friday in Kunduz is understandably described by most as war – by me too. A country mourns with you,” Guttenberg said during the service. “Rest in peace, soldiers.”

The event marked the first time that Merkel – or any modern German leader – has attended a service to honour German soldiers killed in action. Germany has lost 39 soldiers in Afghanistan since the Bundeswehr joined NATO operations there.

The Bundeswehr paratroopers – aged 25, 28 and 35 – were shot during a fierce battle against insurgents in the Chahar Dara district southwest of the city of Kunduz on Good Friday. Eight other soldiers were injured in the fight, four of them seriously.

The three soldiers had been deployed from the nearby Seedorf military base, where flags flew at half-mast on Friday.

“We cannot grasp what has happened,” military reverend Hartmut Gremler said during the service. “Why these deaths? We stand here helpless.”

But even as mourners prepared to attend the church service, a spokesperson from Germany’s military command centre in Potsdam confirmed on Friday morning that two explosives were detonated as a convoy passed on a road four kilometres from a Bundeswehr camp in the Kunduz district of Afghanistan around 9:30 am, damaging a German military vehicle but injuring no-one.

The recent bloodshed in the country has renewed debate over military policy in Afghanistan and whether the Bundeswehr is being properly outfitted and trained.