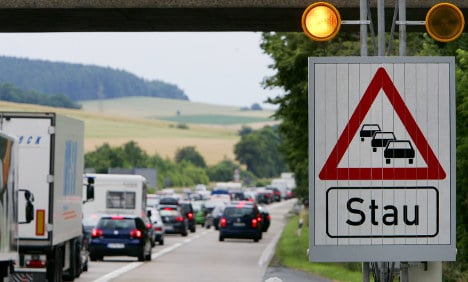 The minister told daily Rheinische Post that he had recently been “irritated by overtaking lasting for more than five kilometres” on a trip between Chiemgau and Bonn.

A ban on truck passing could clear up traffic, though the decision lies with individual German states, he told the paper.

In addition to the passing ban, Ramsauer, a member of the conservative Bavarian Christian Social Union (CSU), said he hoped to reduce road resurfacing times down from 90 to 60 days for a five-kilometre stretch of road.

Traffic snarls cost Germany up to €100 billion each year, the paper reported.

And though in the past Ramsauer has hinted that his ministry might favour road tolls for passenger cars, or a PKW-Maut, to finance road infrastructure, the minister insisted this was not imminent.

“I won’t impose any limit to ideas on this,” he told the paper. “But what’s clear is that no PKW-Maut is on the agenda.”

Instead, private roadway financing could be a way forward, he added.

Presently the road charge for the autobahn is imposed only on goods vehicles such as trucks, which is called the LKW-Maut. Trucks pay a road charge in Germany based on the distance driven, the size of the vehicle and its carbon emission rating.

The toll was introduced in 2005, partly as a way of charging foreign freight vehicles for using German motorways. The average truck pays about 15 cents per kilometre and most tolling is done automatically.