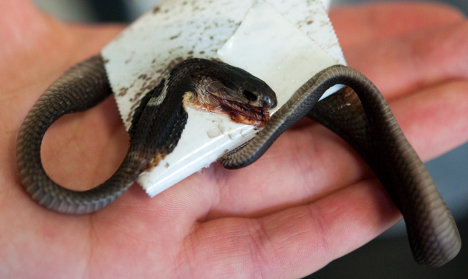 The monocled cobra was found dead stuck to a glue trap placed in the apartment of its 19-year-old owner in Mülheim an der Ruhr.

“We had hoped to catch it alive and wished it a long life properly kept, but it was not to be,” said city spokesman Volker Wiebels said on Thursday.

He said the potentially lethal snake likely died from starvation and exhaustion. The city’s authorities launched a massive search for the cobra after the 30-centimetre-long serpent escaped from its cage on March 18.

The snake forced the evacuation of the owner’s entire apartment building. The reptile fan’s flat was completely gutted and flour was strewn on the floor to show where the cobra was hiding, but it kept a low profile until the weather started to warm up.

“That heated up the house to temperatures comfortable for a cobra,” said Wiebels.

But the hungry snake fell for some bait on a glue trap and it was apparently too weak to free itself again. A fireman eventually found its lifeless body during a routine patrol of the premises.

“We now know there is no further risk and we can say this house is snake free,” said Wiebels.

The search effort is estimated to have cost the Mülheim authorities over €100,000, but the cobra’s owner will be hearing from the city.

“He’s going to get a bill from us,” Wiebels said.