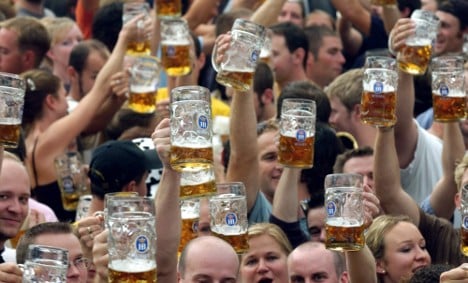 DHS head Raphael Gaßmann said attitudes about smoking are changing in the country. Thirty years ago a television series like the country’s favourite crime series Tatort would have been full of smoking police officers, but that’s no longer the case, he said.

“Today directors wouldn’t think of it,” he said, explaining that government and social anti-smoking campaigns have been successful.

There was also a reduction in smoking among young people between 12 and 17-years-old, the study found. Currently 15 percent of girls and 16 percent of boys admit to the habit.

While smoking may be down, drinking alcohol remained at the same high level as the year before, the DHS found.

On average, Germans drank 9.9 litres of pure alcohol in 2008, the equivalent of 200 litres of beer. This puts the Teutons at number five among Europe’s heaviest drinking countries, behind Luxemburg, Ireland, Hungary and the Czech Republic.

Among the beer-guzzling Germans, some 18.3 percent drank enough alcohol to damage their health, Gaßmann said, explaining that women should not consume more than 12 grammes per day, and men no more than 24 grammes.

Meanwhile alcohol consumption among young people did not fall – the number of those between the ages of 10 and 20 who were treated for alcohol poisoning rose by 170 percent in the space of a single year, the report said.

But the elderly were also found to be a “potential risk group” for alcohol and drug abuse. The number of 75 to 80-year-olds who reported drinking too much rose by 200 percent.

Meanwhile some 2.8 million people over the age of 60 have problematic relationships with their prescription medications, a number expected to rise as the population ages, the study said.