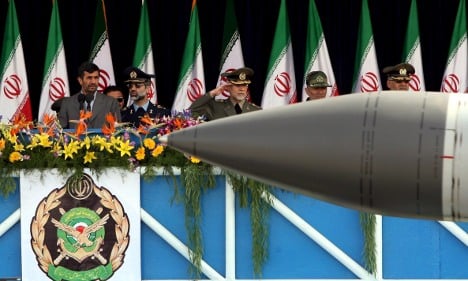 Both men, who were formally charged on March 24 with breaching an EU and US embargo on such materials, “knew that the equipment was meant to be used in the Iranian missile programme,” prosecutors said in a statement.

“Iran has been developing long-range missiles to carry weapons of mass destruction since the late 1990s,” prosecutors said. “In order to get around the export restrictions, Iran gets hold of the technology needed for its missile programme via third party firms.”

Mohsen A., tapped by a “leading employee of Iran’s missile programme,” bought the furnace from the German firm in 2007 for €850,000, telling German customs that he was the final recipient.

The furnace was then shipped to Iran and in March 2008 the German firm began to install it. They stopped work however after learning that Mohsen A. was suspected of working for the Iranian government.

Mohsen A. was arrested in October following a series of raids at commercial and private premises around Germany, and remains in custody, prosecutors said. Behzad S. is currently a free man.

Germany, the world’s number two exporter after China, sold €3.7 billion in goods to Iran in 2009, official figures show, but German firms have cut ties amid unease over Tehran’s nuclear programme and government pressure.

In addition, the government of Chancellor Angela Merkel, who has spoken out strongly in favour of fresh sanctions, is applying pressure on business groups not to organise seminars on Iran or business trips to the country, according to media reports.

Germany is one of six countries negotiating with Tehran over its nuclear programme, along with permanent UN Security Council members the United States, China, Russia, Britain and France.