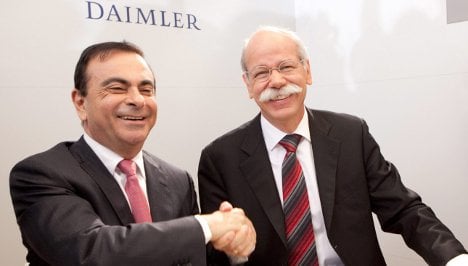 Renault-Nissan, whose own alliance already goes back 11 years, and Daimler AG, which makes the luxury Mercedes-Benz line and the Smart brand aimed at crowded and polluted cities, will exchange shares and technology as the auto industry bids to bounce back after recession.

“Our skills complement each other very well. Right away, we are strengthening our competitiveness in the small and compact car segment and are reducing our CO2 footprint – both on a long-term basis,” Daimler CEO Dieter Zetsche said, referring to the industry’s efforts to mitigate climate change fears.

The companies, which anticipate combined savings of €4 billion ($5.34 billion) over the first five years of their cooperation, will share existing diesel and gasoline engines while jointly developing technology for new electrical versions.

They plan to produce and market new cars and vans in a bid to close the gap on the world’s best-selling auto makers, a similar alliance finalised last year between Volkswagen and Suzuki, and Toyota.

“We know that we can make brand-typical products based on shared architectures. The individual brand identities will remain unaffected,” said Zetsche.

Renault chief Carlos Ghosn said he would remain “prudent” in terms of how the “strategic” cooperation would affect employment in an industry that has been decimated in Europe, with hundreds of thousands of manufacturing jobs transferring out of the region.

However, he said that more than 1,000 new jobs, mainly for engineers and short-term workers, would be created in research and development facilities in France.

Nissan was already 44.3-percent owned by Renault, although the Japanese firm itself owned 15 percent of the French company – another 15 percent of which is held by the French state, which gave its blessing to the deal.

The agreement comes as the global auto industry toils to overcome a slump caused by the economic downturn with firms looking to reduce costs in a bid to compete more effectively.

The companies said they had agreed to develop Renault-Nissan engines for use in the Smart and Renault Twingo, to be adapted and modified with Mercedes-Benz characteristics for new premium compact cars. The Renault Clio was one of the most successful small cars of the last decade.

Under the plans, the next-generation Renault Twingo, Smart “fortwo” and a new Smart four-seater will be engineered using jointly developed architecture and will include an electric version with a launch slated for 2013. In addition, Daimler will provide engines to Infiniti, Nissan’s luxury division.

Zetsche said that “right from the start, all models will also be available with electric drive.

“The synergies with Daimler have a net present value of at least €2 billion for the alliance in both cost and revenue opportunities over the next five years,” Renault-Nissan boss Ghosn underlined.

Asked to place a value on the Daimler savings, Zetsche said the “incremental value to Daimler is of the same value as Carlos mentioned.”

The equity exchange was pegged at 3.1 percent each so as to encourage teams to view the arrangement as long term and “open the books,” Ghosn explained, meaning the sharing of technology and ideas.

He said talks began with Daimler as a way of revitalising the Smart brand and that it was discovered the German company was the ideal strategic partner because there was practically no direct competition.

However, he said there were no plans to collaborate in their respective Formula One racing commitments.