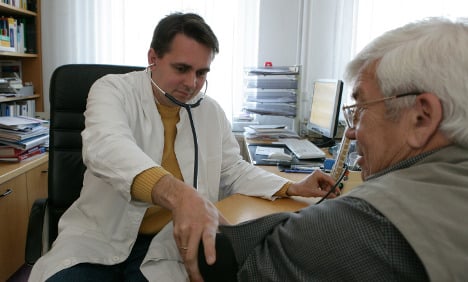 A rural doctor in Brandenburg conducts an exam. Photo: DPA

Rösler, a member of Merkel’s junior coalition partner party the Free Democrats, recently said that students applying for medical school could be ensured a position if they agreed to spend several years working as country doctors.

But the health expert for the opposition Social Democrats Karl Lauterbach called the idea an “Easter gag,” and said he doubted a secure position in medical school would make being a doctor in rural areas any more attractive.

“If the specialist in the city earns more than the family doctor in rural areas, then new selection methods and quotas bring nothing,” he told daily Passauer Neue Presse.

The SPD politician added that more medical school positions were needed instead – citing a drop from 12,000 in West Germany alone in the 1980s, to just 9,000 in the whole country currently. Other problems include that many of the students – of whom 60 percent are women – do not remain in the field.

Bavarian Health Minister Markus Söder also criticised the plan, though he agreed something must be done to find more rural medical experts.

“On the drawing board much of it is right – but the reality is often harder,” he told Berlin daily taz, calling instead for the introduction of scholarship programmes for potential country doctors and for rural communities to strengthen their offerings for such candidates.

“If all those who finished medical school would take on the job we would have no doctor shortage, not even a country doctor shortage,” he told the paper, adding that this had nothing to do with university policies, but with healthcare policies.

Head of the German Medical Association (GMA) Frank Ulrich Montgomery said that while Rösler’s plan could be practical, it was “not the philosopher’s stone.”

Instead, rural communities need to improve working conditions for doctors and cooperation between practices and hospitals.

“The communities must build the infrastructure so that a doctor can hold rotating hours in different villages,” he told daily Ruhr Nachrichten.