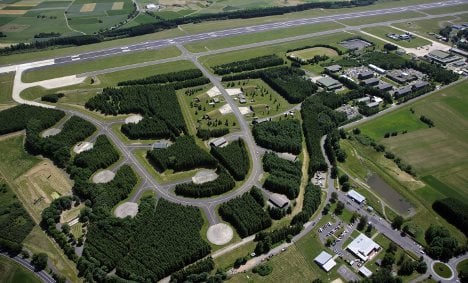 The Büchel air base, where US nuclear weapons are said to be stored. Photo: DPA

“I warmly welcome the fact that the United States wants to take another courageous step towards disarmament,” the minister told daily Bild.

The administration of US President Barack Obama indicated in its Nuclear Posture Review released Tuesday that Washington would only consider the use of nuclear weapons “in extreme circumstances” to defend its vital interests.

In a major policy shift, it said for the first time that states without atomic weapons which complied with non-proliferation treaty obligations need not fear a US nuclear attack.

However US President Barack Obama warned exceptions could be made for “outliers” Iran and North Korea, both of which are suspected of trying to acquire a nuclear bomb.

Westerwelle said the announcement gives hope for further cutting the number of US tactical nuclear warheads and “even the total withdrawal of these weapons from Germany.”

According to experts the United States still has some 10 to 20 nuclear warheads stationed in Germany.

The withdrawal of US nuclear weapons from German soil is a key policy goal for Westerwelle’s liberal FDP party.