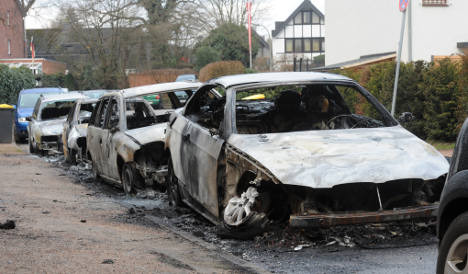 The fires in the Flottbek district spurred a search for the arsonists that included more than 20 patrol cars, but officers reported no trace of the perpetrators so far.

On the previous night unknown culprits lit six other vehicles on fire in the city’s Harvestehude district. There fire fighters were able to save a nearby apartment building and a carport from the flames.

In the last year, about 150 cars have been burned in Hamburg, many attributed to left-wing extremists and anarchists.

In late March daily Bild reported that the number of politically motivated offences in Germany had soared to its highest level since record began.

Citing an Interior Ministry report, the paper said there were 33,917 politically motivated crimes committed in 2009. Many of these include car burnings in Hamburg and Berlin.

Although offences committed by right-wing extremists are twice as common as those committed by the left, it is a massive jump in left-wing crime that is responsible for the new peak.

Crimes by the far right, meanwhile, fell by 4.7 percent compared with 2008, totalling 19,468. Assault is a particularly common far-right crime, the report said.

Towards the end of last year, there was a spate of far-left attacks, including incidents in which perpetrators threw Molotov cocktails, paint bombs and cobblestones at Berlin’s Treptow district Federal Criminal Police (BKA) office. Around the same time, offices for the centre-left Social Democrats and the conservative Christian Democrats were also vandalised with anti-war graffiti.

And in Hamburg, about 10 masked perpetrators attacked a police precinct in the Schanzenviertel neighbourhood, setting a police cruiser alight, damaging other police cars and breaking windows with stones.

At the time, the head of the German Police Union, Rainer Wendt, branded the attacks a “declaration of war.”

Meanwhile the car burnings have spawned copycat crimes. According to a Hamburg police spokesperson, on Monday night an eight-year-old in Osdorf district managed to light two cars on fire using paper.