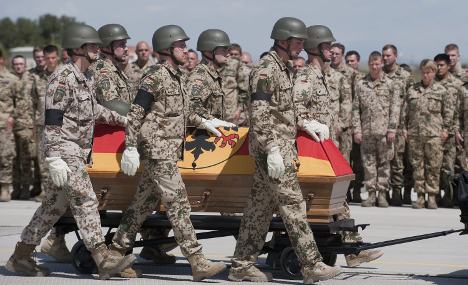 Opposition parliamentarians argued that Germany was failing in both training and strategy, but MPs from the governing coalition said they stood behind current military policies.

“The soldiers have told me that there are deficits in training,” outgoing parliamentary commissioner for the Bundeswehr Reinhold Robbe told daily Bild, adding that they had too few vehicles for missions.

But head of the parliamentary foreign affairs committee and member of the ruling Christian Democrats Ruprecht Polenz told broadcaster ZDF that he was “not familiar” with such deficits, also rejecting opposition calls by Green party parliamentary group leader Jürgen Trittin for a “definitive troop withdrawal” plan.

Christian Schmidt, from CDU’s Bavarian sister party the CSU and parliamentary liaison to the Defence Ministry, also rejected criticism that Bundeswehr troops were inadequately armed for the conflict.

But Schmidt did tell daily Passauer Neue Presse that the public had been led to believe the conflict was insignificant in the first years of the country’s involvement.

“It’s time to look the facts in the eye,” he told the paper. “We’re conducting a war-like conflict. It’s not just about digging wells.”

Schmidt’s comments were a nod to fellow party member Defence Minister Karl-Theodor zu Guttenberg, who broke a long-standing political taboo on Sunday and called the conflict a “war.”

German politicians, notably Guttenberg’s predecessor Franz Josef Jung, have long been at pains to avoid the W-word to describe Germany’s involvement in Afghanistan, which remains broadly unpopular at home.

Guttenberg was spurred to make his remarks by the bloodshed on Friday, when three German soldiers were killed and several others seriously injured after their minesweeping convoy was ambushed by at least 100 Taliban insurgents. Just hours later, a German armoured patrol opened fire on two vehicles carrying allied Afghan soldiers after the vehicles failed to stop, killing six of them.

Guttenberg also promised a full investigation into the friendly fire incident and vowed, “We will stay in Afghanistan.”

But Green party defence expert Omid Nouripour called for a sweeping review of the overall situation for soldiers in Afghanistan was needed to determine when they could leave.

“Without taking stock, we have no possibility to estimate the effectiveness of the Bundeswehr mission in the area,” Nouripour told daily Frankfurter Rundschau, calling on Guttenberg to take action.

A productive mission is important in the goal of handing control of Afghanistan back to its residents as soon as possible, Nouripour added.

Germany has participated in the conflict in the Kunduz regions since 2002 as a member of NATO’s International Security Assistance Force (ISAF). There are currently more than 4,500 troops serving in the mission. The bloodshed last week brought the number of German soldiers killed in Afghanistan to 39.