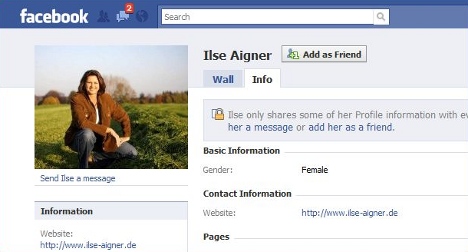 “With great astonishment I have seen that Facebook, despite the wishes of users and massive criticism from consumer protection advocates, wants to further loosen data protection in its network,” Aigner wrote.

Facebook is the world’s most successful social networking website with some 400 million registered users globally, including 7.5 million in Germany.

In a recent revision of its guidelines on data protection, the site has said it plans to pass its users’ data on to certain, pre-approved third parties, notably other websites.

“In order to provide you with useful social experiences off of Facebook, we occasionally need to provide general information about you to pre-approved third party websites and applications that use Platform at the time you visit them (if you are still logged in to Facebook),” the site’s privacy policy, issued March 26, reads.

“Similarly, when one of your friends visits a pre-approved website or application, it will receive general information about you so you and your friend can be connected on that website as well (if you also have an account with that website).”

Information passed would include name, gender, profile picture and the location of the user’s computer. This data would be passed on automatically without the user’s consent, though there is an “opt-out” possibility.

Facebook is still weighing whether to go ahead with the changes and has asked its members for feedback.

But Aigner said personal data must not be automatically handed around for commercial ends.

“Private must stay private,” she wrote in her letter. ”I think I speak here for all internet users. Sadly, Facebook is not paying attention to these wishes,” she said.

“Precisely because younger users in particular are mostly not aware that their personal profiles will be used for commercial purposes, companies like Facebook have a special responsibility.

“Should Facebook be unprepared to change its company policy and resolve this blatant grievance, I will feel compelled to cancel my membership.”