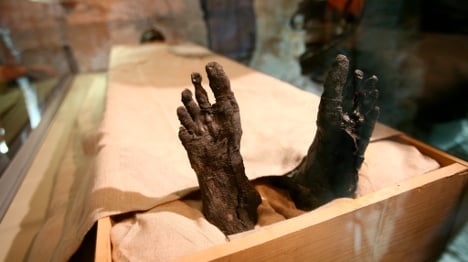 The high-frequency “terahertz” scanners can scan fragile mummies in a way that is less damaging than X-ray scanners, which can destroy precious DNA, the scientists say.

Markus Walther and Andrea Bitzer from the Materials Research Centre at the University of Freiburg, have found that the terahertz rays can penetrate the cloth material used to wrap mummies and conveniently probe the dessicated body beneath.

The airport scanners – often derisively referred to a “naked scanners” or “digital strip searchers” – have come up against fierce opposition in Europe and particularly in Germany with privacy campaigners arguing they effectively show the passenger nude.

The airport body scanners take advantage of the fact the waves penetrate clothing but don’t pass through the human body, which is heavily hydrated, or any objects hidden under the clothes.

But the high frequency waves could more effectively probe the dessicated tissue of ancient mummies, Walther said, even if larger and denser parts such as the head remained impenetrable.

The idea had come by chance to both Andreas Bitzer and Lena Öhrström from the University of Zurich, Bitzer recalled. The idea was eagerly embraced by the Swiss Mummy Project, a collaboration of Swiss universities, foundations and museums.

The project’s leader, Zurich mummy expert Frank Rühli, who had worked on the 5,300-year-old Ötzi iceman found on the border of Austria and Italy provided a mummified human hand and a mummified fish to test the technique.

It worked and Rühli today hails the terahertz method as a “new, non-invasive diagnostic method” for the future.

Though the images were admittedly not as good as X-rays, they crucially did not pose the danger of destroying precious DNA, he said.

Rühli said he had great hope that the further development of the body scanner would soon make it possible to examine whole mummies.