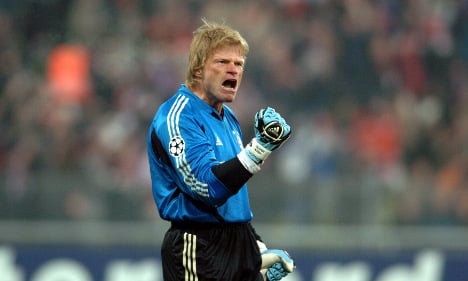 In an interview with daily Süddeutsche Zeitung, Kahn said he would not even chase a position in the management of Germany’s national team for the time being.

Kahn, one of the most successful players of the modern era in Germany, said he was in a “development phase” at the moment which he expected to continue until 2012.

“I can’t at the moment imagine a future for myself as trainer or sports director,” he said. “For a start I have enough to do with business. Secondly I find it’s better to approach things slowly.

“I find myself at the moment in a development phase, as it were, to prepare myself for the future. You see it with (sacked Stuttgart coach) Markus Babbel, that in this business you get a new job quickly – but in the event you lose the new job even faster.”

Kahn has recently completed a management course at a private Austrian university.

He stressed that complete readiness was needed for the top jobs in professional football.

“Education is the foundation. An ex-sportsman has to understand, that in his career he can’t trade on his old merits.”

There has been talk of Kahn’s succeeding Oliver Bierhoff as the national team mangager – a largely administrative role distinct from the coaching role of coach and trainer Joachim Löw.

During his long career as a player, Kahn helped his teams win eight German championships, six German cups, the UEFA Cup in 1996, the UEFA Champions League and the Intercontinental Cup (both in 2001).

Personally he won four consecutive UEFA Best European Goalkeeper awards, two German Footballer of the Year trophies and the Golden Ball for his performance at the 2002 FIFA World Cup.