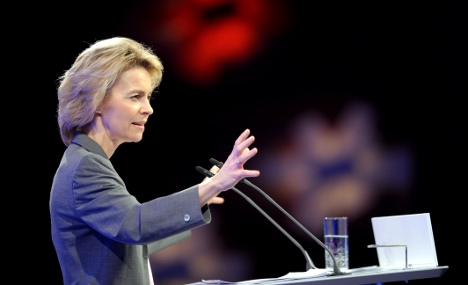 Fifty-six percent of those asked said they were most happy with von der Leyen’s work, according to broadcaster WDR’s monthly survey.

The defence minister, embroiled in a parliamentary committee investigation of how his ministry handled a deadly bombardment in Afghanistan, suffered a loss of 14 points to reach a 55 percent approval rating.

Meanwhile Chancellor Merkel also dropped by seven points to tie with Guttenberg at 55 percent – her worst rating since November 2006.

But the FDP as a whole continued to lose points with the public, dropping by two to reach just eight percent. Their coalition partners, the CDU, also lost one point to land at 35 percent.

Those three points likely went to the centre-left Social Democrats, who topped out at 28 percent, the party’s best rating since May 2009.

The socialist Left party lost one point, landing at 10 percent, while the environmentalist Greens stayed at 14 percent.

The poll of 1,500 voters was conducted on Sunday for the WDR by research institute Infratest dimap via telephone.