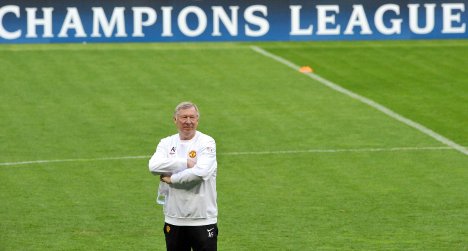 The sides meet in the first leg in Munich in a match that re-unites the teams contesting the 1999 final. Back then United won 2-1 thanks to two injury-time goals to record their only win over Bayern in Europe’s top club competition.

“The two clubs have a great history, it does put an edge to the game I feel,” said Ferguson. “I respect Bayern Munich. I have a great admiration for this club. We are playing against history.”

Ferguson said Wayne Rooney and Rio Ferdinand were both fit and raring to take on Bayern’s best including French midfielder Franck Ribery and Dutch winger Arjen Robben, who is an injury doubt.

“They have many good players. Whether Ribery and Robben will play I don’t know, I have to plan for that,” he said, but the legendary Scottish manager refused to countenance comments from Bayern coach Louis van Gaal that the German side are the underdogs.

“He is a clever man, I don’t pay attention to that,” said Ferguson. “Their motivation to play the first game at home will be strong, I don’t think at any moment it will be an easy game.”

And van Gaal insisted on Monday the Bundesliga giants feared neither Manchester United nor their star striker Wayne Rooney.

“Bayern is maybe not yet a top level European club but we can reach this level during a match,” said van Gaal. “It’s a big game for all of us. We can show all of Europe what we’re worth.”

Van Gaal also paid tribute to Ferguson and the discipline he has instilled in his team.

“Our team has quality, but I’m sure of one thing: Manchester United play in a very organised and disciplined way, I’m jealous of this discipline,” he said.

The 1999 triumph in Barcelona brought Ferguson the first Champions League title of his glittering Old Trafford tenure but he insisted that all thoughts of that night were in the past.

“I don’t think they think about it,” said Ferguson. “In fact, I don’t think one of their (current) players played in the final.”