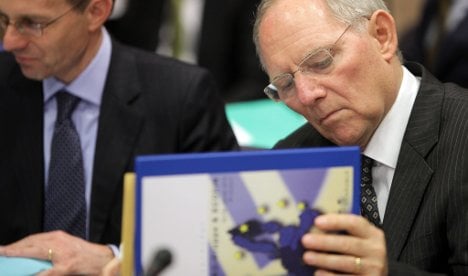 In the wake of the EU’s conflicted response to Greece’s precarious fiscal situation that has pressured the euro, Schäuble said Europe must develop a political counterpart to monetary union.

“We need better instruments to enforce the stability pact,” he told this week’s edition of Die Zeit. “And we need greater coordination along the lines of an economic government – even if we don’t love this phase very much.”

He said he hoped both his conservative Christian Democrats and the German government would do more to champion the cause of European integration.

“It all comes back to more Europe, not less. Sometime I have the impression others could more actively explain what the common European advantages are,” he said.

The full integration of the EU’s eastern members was in the interest of Germany, as it would put the country’s formerly communist eastern half at the centre of a thriving continent, Schäuble said.

“Europe won’t become a federal state like the Federal Republic of Germany,” he told the paper, referring to widespread German scepticism against handing over too much sovereignty to Brussels. “But I’m convinced politicians will be able to convey the concept of a federal Europe of states.”