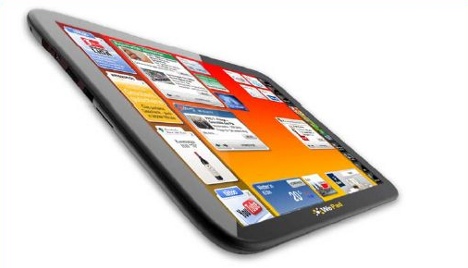 Developer Neofonie is already involved in talks with publisher Gruner+Jahr, which publishes news magazine Stern, and plans to announce details of additional cooperation with publishers for its “WeMagazine ePublishing Eco System” on April 12.

CEO Helmut Hoffer von Ankershoffen said his open platform product contrasts Apple’s business strategy for the iPad, which he alleges “dictates constraints all the way to marketing” for publishers.

With an 11.6-inch display, the touch-screen WePad is slightly bigger than the 9.7-inch iPad. It also offers features not available for the iPad – a camera, two USB plugs and a memory card slot. It will run a version of Google’s open operating system Android.

And unlike the iPad, the WePad allows publishers to choose their own paid content parameters without going through a gateway like Apple’s iBookstore.

The company hopes its new product will also be particularly appealing to elderly users, who are also a “core target group” of newspaper and magazine publishers and have limited experience with technology.

WePad will give these users “intuitive and fast access to the digital world of their children and grandchildren,” its website says.

The first iPads will reach German stores in late April, and the WePad is expected to follow in early May.