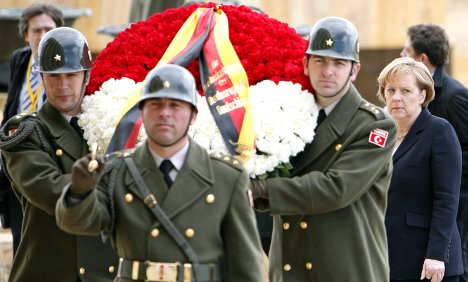 Merkel was to have talks in Ankara with Prime Minister Recep Tayyip Erdogan, President Abdullah Gul and the chief negotiator in Turkey’s European Union membership talks, Egemen Bagis, before travelling on to Istanbul.

Diplomatic tension built up ahead of the visit as the German leader insisted the mainly Muslim nation was not fit for EU membership and should instead settle for a “privileged partnership,” an alternative Ankara flatly rejects.

The rift widened as Erdogan slammed Germany’s “grudge” against Turkey after Merkel snubbed his proposal to open Turkish high schools for the sizeable Turkish immigrant community in Germany.

The two leaders “have been taken hostage by their populist instincts and… have damaged a dialogue well needed and timely,” the English-language Today’s Zaman daily wrote Monday.

Merkel’s insistence on “privileged partnership” has strengthened “a perception that the likes of Merkel are playing with Turkey’s honour” at a time when Turks “already have little trust left in the EU,” the Milliyet newspaper said.

Since starting accession talks in 2005, Turkey has succeeded in opening only 12 of the 35 chapters that candidates are required to complete.

France has also been a vocal opponent of Turkey’s accession aspirations. The two EU heavyweights believe that a vast, relatively poor country with a mainly Muslim population of 71 million has no place in Europe.

“The privileged partnership just does not exist… This does not have any legal basis in the European Union,” Bagis, Turkey’s chief negotiator, said Saturday in reaction to Merkel’s remarks.

The accession negotiations have also been slowed by Ankara’s sluggish pace of reform and its refusal to allow EU-member Cyprus – a country it does not recognise – access to its ports under a customs union accord with the Union.

Another contentious issue in Turkish-German ties involves the estimated 3.5 million Turkish immigrants and their descendants in Germany, the country’s largest ethnic minority outside the Turkish diaspora.

Erdogan had already caused a row in 2008 by saying he was against their assimilation in Germany.

“In Turkey, we have German high schools – why shouldn’t there be Turkish high schools in Germany?” he told the German weekly Die Zeit Thursday, complaining also that Germany did not allow dual citizenship.

Merkel responded by insisting that “Turkish children and pupils should go to German schools.”

Erdogan in turn he was disappointed by Merkel’s snub, saying he “cannot understand the reason for this grudge against Turkey,” in remarks published in Turkey’s Hurriyet daily Sunday.

During her visit, Merkel and Turkish leaders were expected to also discuss Iran, the Middle East peace process and economic relations.

Merkel has held out the possibility of further sanctions against Iran over its nuclear programme, while Erdogan has rejected the idea.

The German chancellor was scheduled to wrap up her visit Tuesday after touring historic sites in Istanbul and attending a business forum there.

Germany is one of Turkey’s principal economic partners – bilateral trade amounted to almost €25 billion in 2008. More than 4,000 German companies operate or have partnerships in Turkey.