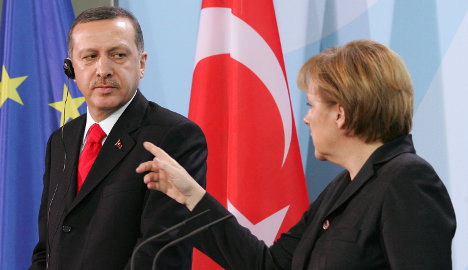 The rift between the two countries has been exposed during the run-up to the visit, on two levels, with arguments about integration of Turks into Germany, as well as Merkel’s opposition to Turkey’s entry to the EU.

“This is going to be a difficult visit; some statements may even overshadow bilateral relations,” Semih Idiz, a foreign affairs commentator from the Milliyet newspaper told AFP

In remarks published in Turkish newspapers last Wednesday, Merkel said she would insist on a “privileged partnership” for Turkey rather than EU membership, during her visit.

“There are intertwined relations between Turkey and the EU. There are 35 chapters in the (membership) talks. I am confident that 27-28 of them can be taken up and this will really mean a privileged partnership,” she was quoted as saying by Milliyet.

She also stressed that Turkey’s accession negotiations remained “open-ended”, without guaranteeing an ultimate membership for Turkey.

Turkey immediately retorted that there was no alternative to EU accession.

“Our position is clear… There is no option for Turkey other than full membership,” foreign ministry spokesman Burak Ozugergin said.

Since starting membership talks in 2005, Turkey has succeeded in opening only 12 of the chapters that candidates are required to complete in order to join the bloc.

The process has also been slowed by Ankara’s sluggish pace of reform and its refusal to allow EU-member Cyprus – a country it does not recognise – access to its ports under a customs union accord with the Union.

Apart from Germany, France is also another vocal opponent of Turkey’s EU aspirations. The two EU heavyweights believe that a large, relatively poor country with a mainly Muslim 71 million-strong population has no place in Europe.

“The Chancellor is very committed to the fact that Europe does not lose its character,” a source close to the German government said.

Commentator Idiz underlined that Merkel was more restrained than Sarkozy when it comes to opposing Turkey’s EU drive because, he said, “she is relying on Sarkozy to bar Turkey.”

Another contentious issue between the two countries is the question of integrating or assimilating the estimated 3.5 million Turkish immigrants and their descendants in Germany, the country’s largest ethnic minority and the world’s largest Turkish diaspora.

Turkish Prime Minister Recep Tayyip Erdogan, who in 2008 caused a row by saying he was against the assimilation of Turkish immigrants in Germany, called for the opening of Turkish secondary schools in Germany, in remarks published last Thursday.

“In Turkey, we have German high schools – why shouldn’t there be Turkish high schools in Germany?” he told the German weekly Die Zeit, also complaining that Germany did not allow dual citizenship.

While in Germany two weeks ago Erdogan warned Turks at a meeting in Cologne to preserve their national identity, and called the idea of assimilation a crime against humanity.

Merkel hit back on Friday at the proposal for Turkish schools, saying: “I do not think this brings us forward, as I think that Turkish children and pupils should go to German schools.”

During her visit, Merkel will also discuss Iran, another point of contention, with Erdogan opposing new sanctions, in a clear contradiction to Merkel’s position.

In 2008, bilateral trade amounted to almost €25 billion while more than 4,000 German companies operate in Turkey or have partnerships there.

On what will be her second visit to Turkey after a first trip in 2006, Merkel will holds talks with Erdogan and President Abdullah Gul in Ankara on Monday before flying to Istanbul.

There she will tour the city’s historic sites on Tuesday and attend a business forum before leaving the country.