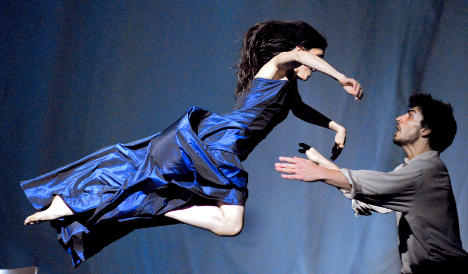 Representatives from around 50 theatres nationwide joined the estimated 2,500 people at the Wuppertaler Schauspielhaus to show solidarity not only with the local fight but to also raise awareness of threats to other theatres in Hagen, Oberhausen, Essen and Schleswig.

People came from as far as Osnabrück and Dresden to the North Rhine-Westphalia town, pleasing organiser Holk Freytag, who said this was the first time theatre supporters had worked together to such an extent.

“Wuppertal is the example which illustrates the financial threat facing local governments in the whole of Germany,” said Freytag, who is chairman of the directors’ group in the German theatre association.

The aim of the demonstration was to make public the terrible financial condition which local governments are in, forcing them to consider closing theatres, he said, blaming the situation on the federal authorities.

Saturday’s demonstration kicked off with the laying of a wreath on the graves of actor Arno Wüstenhofer and choreographer Pina Bausch, and included a motorbike parade in which actor Armin Rohde took part.

The demonstrators marched through town from the Schauspielhaus to the opera house where the theatre prize of the International Theatre Institute was awarded to Christoph Marthaler and Anna Viebrock in a ceremony.

A petition calling for the theatre to remain open was also presented to a representative of the Wuppertal town government.