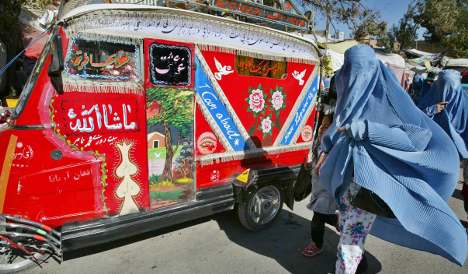 “Afghan women could serve as ideal messengers in humanising,” the mission for European audiences, according to the CIA analysis, posted on WikiLeaks, a whistleblower website.

The views of Afghan women would carry special weight as they could express “their aspirations for the future, and their fears of a Taliban victory,” it said.

German audiences might also respond to marketing efforts emphasising Afghan optimism about the mission, while the dangers of failure should also be played up to get them onside, the document read.

The Central Intelligence Agency declined to confirm or deny if the document was genuine. But WikiLeaks has previously posted government and corporate documents that were later verified.

The report also suggested taking advantage of President Barack Obama’s popularity in Germany and France, arguing that appeals from the US president on the importance of the allied role in the war could have a positive effect.

And scare tactics could be used on the German public in particular, it said.

“For example, messages that illustrate how a defeat in Afghanistan could heighten Germany’s exposure to terrorism, opium, and refugees might help to make the war more salient to sceptics,” it said.

The report by a CIA expert on “strategic communications” and State Department analysts of public opinion warned that popular support for the war in Europe was weak and could easily collapse, citing the recent fall of the Dutch government over the issue.

“The tone of previous debate suggests that a spike in French or German casualties or in Afghan civilian casualties could become a tipping point in converting passive opposition into active calls for immediate withdrawal,” it said.

The analysis, dated March 11, suggested public relations strategies to drum up support for the war in Germany and France, which maintain the third and fourth largest troop deployments in Afghanistan.

“Outreach initiatives that create media opportunities for Afghan women to share their stories with French, German, and other European women could help to overcome pervasive scepticism among women in Western Europe toward the ISAF (International Security Assistance Force) mission,” it said.

Public relations efforts could “tap into acute French concern for civilians and refugees,” the report said, suggesting highlighting polls that show most Afghans support the presence of coalition troops.

Such an approach could stress the potential dangers facing Afghan civilians if NATO-led troops were defeated and play on European guilt for abandoning them.

The memorandum is titled: “Afghanistan: Sustaining West European Support for the NATO-led Mission — Why Counting on Apathy Might Not Be Enough.”