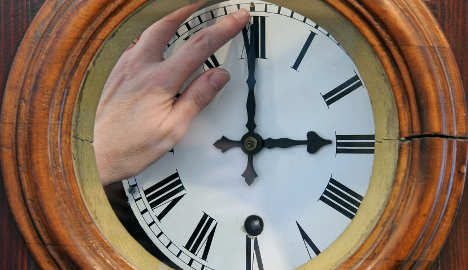 Moving the clocks forward by an hour at this time of year was only adopted in Germany in 1980, and remains controversial, with complaints over tiredness and lack of concentration.

One of the driving ideas behind the introduction of summer time was to reduce energy consumption following the oil crisis of 1979, with the thinking being that daylight would be used more and lighting and heating costs saved.

But the federal association of the energy and water industry, the BDEW, says this goal was not met – although less energy is needed in the long, light evenings, more is needed in the mornings.

Nearly half of Germans find it difficult to adjust their sleeping patterns to get out of bed an hour earlier than normal, according to a survey conducted by Forsa pollsters for the KKH-Allianz health insurer.

Nearly half of the more than 1,000 people questioned said they needed several days to get back into their normal sleep pattern, while finding it tiring and difficult to get up early.

And although it is officially summer time, and the last few days have been warm, enticing people out of their boots and coats, the high temperatures, reaching more than 20 degrees in places, will not last.

New snow is expected on the mountains over the weekend and cooler temperatures will reign everywhere else as two low pressure systems bring rain to much of the country.

The German weather service, DWD, said such conditions should be expected for several days, with temperatures barely clearing 14 degrees.

Easter weekend should cheer up a little, but rain could fall anywhere at almost any time in typical spring conditions.

On Friday night a storm crashed through the Mainz region as far as Ludwigshafen knocking down trees, damaging cars and tearing off roof tiles.