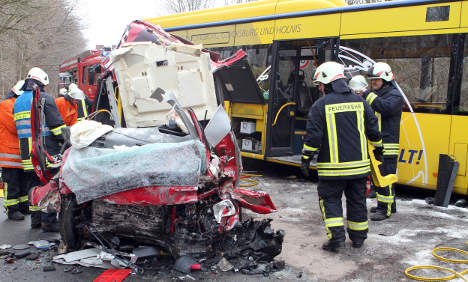 The 43-year-old driver of a Volkswagen van drove into oncoming traffic for unknown reasons between Glücksburg und Flensburg. The driver and a four-year-old child sitting in the vehicle were injured, and the 71-year-old bus driver was killed.

Another four people on the bus were seriously injured, and 17 sustained minor injuries.

Fire fighters on the scene were forced to cut the Volkswagen driver, the child and one of the bus passengers from the vehicle wreckage.

Click here for a gallery of accident cleanup efforts.