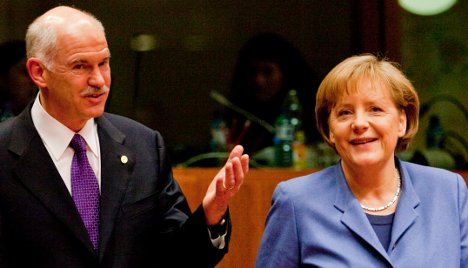 “I think Europe proved its capacity for action on a major issue, at the same time working to protect euro stability and demonstrating solidarity towards a country in difficulty,” Merkel told reporters as she arrived for the second and last day of an EU summit in Brussels.

“For all of us it is important that our common currency… remains stable and that’s why yesterday was important for the euro,” said Merkel, who helped broker the deal with French President Nicolas Sarkozy.

EU leaders agreed late Thursday, after weeks of negotiations, to come to the aid of Greece with an unprecedented offer of bilateral national loans coupled with help from the International Monetary Fund (IMF).

The deal marked the first time the IMF, the international lender of last resort, has been pulled in to rescue a eurozone nation since the common currency came into being in 1999.

The euro rose slightly early Friday following the EU deal, pulling away from previous 10-month lows against the dollar. The euro was at $1.3339 in early London deals, up from $1.3277 in New York late on Thursday.

The German press on Friday hailed Merkel for winning over other EU leaders to her position on Greece, but said that the victory left behind an unpleasant aftertaste.

“Angela Merkel triumphs, the eurogroup has accepted an emergency plan for Greece on her conditions,” Der Spiegel magazine said on its website. Although she has played hardball in Brussels before, “she was always ready to compromise before. But this time she did not bend to the others, she even hardened her position,” the weekly said.

“But the price is high: for her EU partners, ‘Miss Europa’ has turned into ‘Frau Nein’. We are threatened by huge damage to our image.”

The Handelsblatt business daily said that Merkel’s “verve” was reminiscent of former British Prime Minister Margaret Thatcher, but that she had scored a “bitter victory.”

Calling her the “iron chancellor” – as Germany’s no-nonsense first Chancellor Otto von Bismarck in the 19th century was also known – the paper said Merkel won “but she had to break a lot of china doing so.”

There is now “little hope” that Merkel will be able to persuade other leaders to adopt tougher checks on eurozone countries’ deficits or that chronic fiscal sinners can be expelled from the 16-nation club, Handelsblatt said.

The Financial Times Deutschland agreed, calling the EU rulebook “obsolete” and saying that changes are so important “that they cannot be buried in a working group.”

“The compromise means the Greek patient is out of danger for the time being,” the FTD said. “But the undeniable result is that someone else is now in intensive care: the currency union as a whole.”

The Frankfurter Rundschau, meanwhile, said that Merkel’s “biggest mistake” had been to listen to people “who never liked the euro” and political opinion polls.