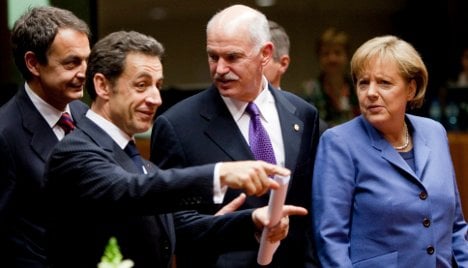 That would mark an unprecedented move since the euro was introduced in 1999, for while the IMF has helped EU countries such as Hungary, it has never been involved in planning a financial rescue for a eurozone nation.

According to the German government, the deal, still to be approved by the remaining eurozone and EU partners, will mean a “substantial” component of IMF money being pumped in to fix a €300-billion black hole in Athens’ finances.

A credit-rating downgrade for Portugal – plus ongoing concerns over Ireland and Spain’s swollen public deficits – has further increased the urgency to act, while commentators have spoken of the EU’s worst crisis in a generation.

The euro picked up as hopes rose for an agreement, climbing to $1.3352 in late trade in London, having earlier fallen to $1.3283, with Europe’s main stocks also improving.

For the French, the split in the contribution would be of the order of “two-to-one” in favour of European states.

However, the text of the accord makes it clear that interest rates for eurozone loans will “not contain any subsidy element.”

A European source nevertheless admitted that participation could only rely on principles of solidarity and persuasion, because “you can’t force anyone” to contribute.

Interviewed by French television before the news was confirmed, the head of the European Central Bank, Jean-Claude Trichet, warned that “any sign of a lack of responsibility” for the eurozone is “obviously very, very bad.”

According to the French, Sarkozy and Merkel agreed to call for new rules representing “economic government” across the eurozone and which would involve strengthening risk-prevention.

A paper agreement laid out “very precise conditions” under which eurozone countries “could be led to intervene,” the Elysee palace added.

Merkel reiterated her belief that a “modification” to EU treaty provisions would be required – something that is vehemently opposed by Britain.

Other EU leaders were seen smiling as they received details of the plans from Merkel, Sarkozy and EU president Herman Van Rompuy on their arrival in the Brussels summit chamber.

The deal was reached after Merkel warned that she would never abuse the “trust” of the German people, a majority of whom opposed granting direct aid according to opinion polls.

Merkel has been compared in her country to former British Prime Minister Margaret Thatcher for insisting on an IMF component in the face of rising Greek anger at the sluggish emergence of concrete European expressions of solidarity.

Athens has been paying interest rates above six percent, more than double what Germany pays, and had asked for an EU deal to be able to borrow on more affordable terms.

Tens of billions of euros are required to repay maturing Greek debt over the next couple of months.

In a separate boost for Athens, Trichet’s ECB made it easier for struggling Greek banks to raise money by keeping loan collateral levels unchanged into 2011.