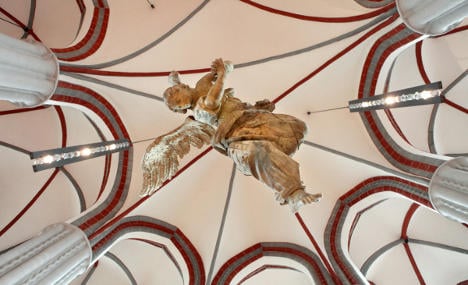 A centrepiece of the capital’s Mitte district, the church was praised by Mayor Klaus Wowereit as a “gem of Berlin’s history.”

“The Nikolaikirche stands as almost no other place does for a complete history of Berlin, which reaches back to the Middle Ages. It stands for the self-awareness of Berlin citizens, for their entitlement to liberty and for their political will.”

CLICK HERE FOR A PHOTO GALLERY OF THE NIKOLAIKIRCHE.

Built between 1220 and 1230, soon after the city was established, the Nikolaikirche was originally a Roman Catholic church, but became Lutheran after the Protestant Reformation in Brandenburg in 1539.

Bombed heavily during World War II, the church stood as a virtual ruin until the communist regime of the German Democratic Republic finally rebuilt it in the 1980s.