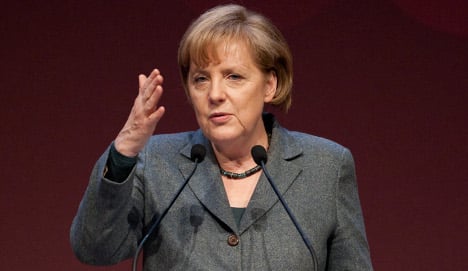 “The German government will press for emergency aid combining IMF and joint bilateral aid from the eurozone but I say again, only as a last resort,” she told the Bundestag lower house of parliament before departing for Brussels.

“I will work decisively for the adoption of an IMF-plus-bilateral-aid decision (at the summit). We will again work very closely with France on this.”

EU leaders hope to seal a deal to help Greece out of its unprecedented deficit crisis.

But the wrangling has threatened cohesion across the eurozone and driven down the value of the euro currency, used by 16 member states including Greece.

EU powerhouse Germany, confronted by strong public opposition to covering Greece’s unpaid bills, has baulked at calls for support, preferring an IMF to a European option if necessary.

Many other eurozone nations, led by France, have championed a purely European solution, fearing that recourse to the IMF would cast a long shadow over the euro.

Days of frantic diplomacy appear to have narrowed the gap but no side has said a deal is in sight.

Merkel on Thursday said she will demand changes to the bloc’s treaties, both to deal with future crises and to prevent them happening in the first place.

“I will push for necessary treaty changes so that we can act sooner and more effectively when things go wrong, including with targeted sanctions,” Merkel said, citing “in particular stronger deficit procedures.”

She said the eurozone had to be able to deal with the eventuality of a member state becoming “insolvent” in a controlled manner “and without threatening the stability” of the 16-nation bloc.

“Europe must learn the right lessons for the future … We have seen that the instruments of the eurozone as they currently stand are insufficient,” Merkel said.

“Cooking the books must be stopped,” Merkel said.