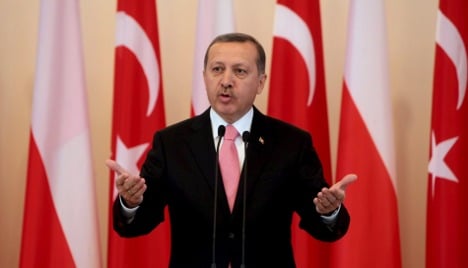 “I find it very regrettable that Germany is among the countries in the European Union that does notallow it (dual citizenship)” he told the German weekly Die Zeit.

“I hope that Germany will also allow it one day,” he said ahead of a visit by Chancellor Angela Merkel to Turkey next week.

Germany only allows citizens to hold the nationality of another state in exceptional circumstances, such as in the case of European Union citizens.

A child of foreign parents born in Germany can obtain dual citizenship if one parent has lived in the country regularly for at least eight years. But the child must choose one of the two nationalities by his 23rd birthday.

Erdogan, who raised hackles in 2008 for opposing the assimilation of people of Turkish lineage in German society, underlined his support for Turkish secondary schools in Germany.

He also said Ankara would settle for nothing less than full membership in the European Union – a stance putting himself on a collision course with Merkel, who only supports a “privileged partnership” for Turkey.

“There are intertwined relations between Turkey and the EU. There are 35 chapters in the (membership) talks. I am confident that 27-28 of them can be taken up and this will really mean a privileged partnership,” she told Turkish daily Milliyet on Wednesday.

“Some issues, like institutional integration, will be left out of the scope,” she told a group of Turkish reporters.

Merkel however stressed the European Union placed “great importance” on the need for Turkey to follow a foreign policy consistent with the bloc’s stance.

Germany’s objections that the sizeable mainly Muslim country is not fit for membership are backed by another EU heavyweight, France, but Ankara points out that it has already opened negotiations aimed at becoming a proper member of the bloc.

“A privileged partnership is unknown to EU treaties,” Erdogan told Die Zeit. “For Turkey it would be a huge mistake to agree to that. And most of the other EU countries don’t accept this suggestion either.”