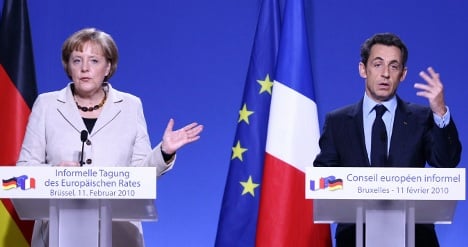 The plan, which is favoured by Chancellor Angela Merkel, has also begun to win over French President Nicolas Sarkozy, reports said.

The two countries are preparing a united front ahead of a crucial two-day European summit starting Thursday.

Business daily Handelsblatt cited French government sources as saying that a “compromise paper” along the IMF route was “fully underway.”

Under the plan, the IMF would be the first port of call if Greece decides it needs emergency financial help, but some European countries would provide voluntary, bilateral assistance as a fallback.

Merkel expressed her own preference for this plan in a meeting late last week with members of her Christian Democrats and Bavarian sister party the Christian Social Union, various media reported.

Daily Die Welt reported Wednesday that despite her previous hard line, Merkel was in fact willing to help Greece and would present at the European meeting in Brussels a framework to help European countries in financial strife. Such help would come with strict conditions and would closely involve the IMF, the paper reported.

The long drawn out speculation is part of a cat-and-mouse game Merkel has been playing that balances the need to firmly insist Greece deal with her own problems against the sheer untenability of having a eurozone member fail.

Germany has argued that rescuing Greece now would take away the incentive for the Greek government to enact reforms to cut its huge budget deficit.

If the IMF plan goes through, it would likely be considered political victory for Merkel, who has been under intense pressure from the EU to promise emergency funding to Greece should the country ask for it.

But European Commission chief Jose Manuel Barroso said German Chancellor Angela Merkel, as a “committed European,” will, “if needed, be in favour of providing financial assistance.”

The to-ing and fro-ing on the issue has been depressing the value of the euro, analysts have warned. On Tuesday, Stuart Bennett, an analyst at French bank Credit Agricole CIB, said “the market is positioning for the worst.”

France, Italy and Spain have all called for quick joint action by Europe to fix to the Greek debt crisis.