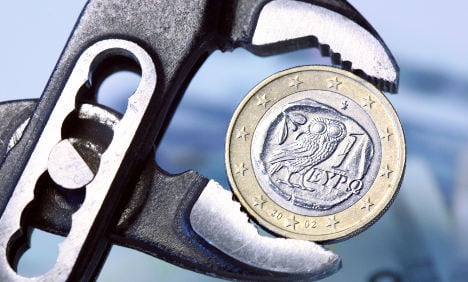 Despite efforts by the European Commission to push national leaders to agree on rescue plans this week, France also softened its position in recognition of deepening divisions in Europe on the crisis.

Commission chief Jose Manuel Barroso said European “solidarity” with Greece would help stabilise the eurozone, in remarks to the <Financial Times on Tuesday.

However, Germany, Europe’s economic powerhouse, argues that rescuing Greece now would take away the incentive for the Greek government to enact reforms to cut its huge budget deficit.

German Foreign Minister Guido Westerwelle said Germany was “very reticent” to work on plans to help Greece, observing that such plans might not be necessary.

Speaking on German radio, he said that money “hasn’t been asked for and I have the impression that the Greek side knows that it must push its reforms forward.”

But Barroso said German Chancellor Angela Merkel, as a “committed European,” will, “if needed, be in favour of providing financial assistance.”

Analysts warned that the uncertainty over Greece in the run-up to the EU summit on Thursday and Friday would depress the euro further, with Stuart Bennett, an analyst at French bank Credit Agricole CIB, arguing that “the market is positioning for the worst.”

France, Italy and Spain have all called for quick joint action by Europe to fix to the Greek debt crisis.

“The French position is very clear,” French Foreign Minister Bernard Kouchner said on Monday. “We cannot, we must not abandon our Greek friends.”

However, a French government source said on Tuesday that Paris was softening opposition to bringing in the International Monetary Fund as part of a wider rescue act.

“Different views” in Europe will “doubtless come together somewhere in the middle,” the source said.

Paris is also bending over backwards to accommodate Merkel’s hardline stance, saying “we have a little time” with which to resolve the issue, and even allowed for “debate” on Berlin’s demand that countries that consistently fail to balance their books could, ultimately, be kicked out of the eurozone.

The political posturing has not impressed markets, with Marco Annunziata, chief economist at Italy’s UniCredit Group, saying eurozone partners are behaving “like teammates in a sack race.”

He said they “have to run while keeping one leg each in the same sack: either they coordinate their actions, or they will fall hard together.”

A senior US Federal Reserve official has warned that the Greek crisis could directly affect the US economy by hitting American exports because of lower eurozone growth as a result of adjustments to rescue Greece.

Atlanta Federal Reserve regional chief Dennis Lockhart also said that the crisis could lead to a broad shock for financial markets which “could play out in the banking system or in the form of a general retreat from sovereign debt.”

Greek Prime Minister George Papandreou says his country faces the prospect of bankruptcy without some form of support, particularly to reduce the interest rate if the country is forced to pay to borrow money on international debt markets.

The yield – or interest rate – on Greek government 10-year bonds rose to 6.446 percent on Monday but had eased to 6.341 percent by Tuesday morning.

Greece has the highest deficit in the eurozone – estimated at 12.7 percent of output in 2009 – and risks a financial crunch as it needs to raise some €20 billion for debt redemptions due by the end of May.

Analysts at French bank BNP Paribas meanwhile said the Greek government faced a key “deadline” next month because of a steep increase in funding needs to repay old debts.

“Greece needs at least €3 billion more” by the end of April, with its first debt redemption due on April 13, they added.

They said the “deadline to the whole Greek story” lay between April 13 and April 23.

Meanwhile French and Swiss banks are heavily exposed in Greece.