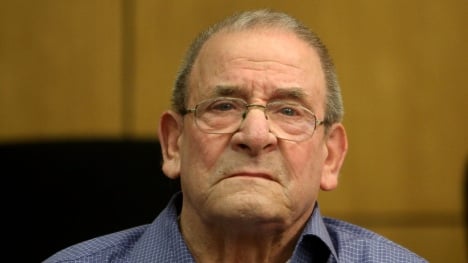 “These were murders that were carried out on a totally random basis,” said presiding Judge Gerd Nohl in the western city of Aachen.

On several occasions, Boere, now wheelchair-bound and living in a nursing home in Germany, and who has spent six decades one step ahead of the law, has admitted to the murders.

But he says that as a member of an SS commando unit tasked with killing suspected resistance members or supporters, he risked being sent to a concentration camp if he refused.

Born in Eschweiler, Germany, to a Dutch father and German mother, his family moved to the Netherlands when Boere was two. He volunteered for the Waffen SS in 1940 and fought on the Eastern Front before returning in 1943.

Taken prisoner of war in 1945, Boere spent time in different POW camps before escaping in June 1947, according to a statement made to the court. He then moved back to Germany in 1954 and worked as a coal miner until 1976.

He was sentenced to death in absentia in Amsterdam in 1949. The sentence was later commuted to life imprisonment.

The Netherlands attempted to have Boere extradited in the 1980s, but failed after a German court ruled that there was a possibility he may have German citizenship. Germany as a rule does not extradite its citizens.

His Dutch citizenship was revoked after the war and his application for German nationality – which he claims he was promised when he joined the Waffen SS – was refused.

In 2003 the Dutch authorities made a successful application for Boere to serve out his life sentence in Germany, but the ruling was overturned.

German prosecutors then charged him, only for a court to declare him unfit for trial. But this ruling too was overturned by a higher court.

Boere’s defence lawyers argued that as a result of his 1949 conviction, even though he escaped all punishment, the trial in Aachen in western German was null and void because of double jeopardy.

Failing that, they argued Boere should serve a much lighter term of seven years.

Since the Nuremberg trials after the war, where several top Nazi officials were sentenced to death, German authorities have examined more than 25,000 cases but the vast majority never came to court.

But now, as the suspected war criminals approach their nineties, there has been a minor flurry of arrests and court cases.

In the most high-profile, 89-year-old John Demjanjuk went on trial in Munich last November on charges of assisting in the murder of 27,900 people at the Sobibor death camp, where prosecutors say he was a guard.