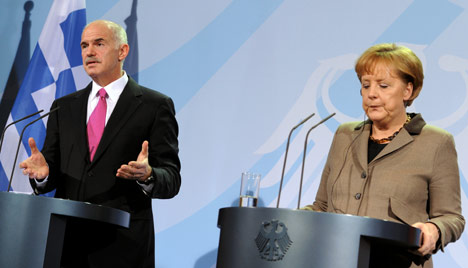 The European Commission, the EU’s current Spanish chair, France and Italy each urged Merkel to nail down aid for Greece at a summit this week and warned that her resistance may feed market attacks on the euro.

“In speculating against the bonds of your partner and friend, and in allowing monetary and credit institutions to take part in this miserable game, people in Germany are making money,” Pangalos said.

“While the countries of southern Europe suffer from the fall of the euro, German exports gain from its weakness,” he added.

Commission chief Jose Manuel Barroso led the Brussels assault as a new poll showed the stakes rising in the Greek debt crisis with 61 percent of Germans opposed to a bailout and 40 percent even wanting Berlin to quit the euro.

“We need a decision at this summit so that we know how we are going to manage the Greek crisis,” Barroso told German daily Handelsblatt.

Warning of “deep uncertainty,” he stressed: “We can’t keep going this way, we risk endangering the stability of the eurozone and feeding (market) speculation.”

The euro fell to a three-week low of $1.3496 on Monday, while the interest rate demanded by investors to hold Greek debt rose sharply to more than 6.5 percent.

Merkel has said that “raising false expectations” of any deal at the summit – even without pressing the button on hard cash loans – would itself cause “turbulence” on markets.

“The point is that on Thursday and Friday – and it is important that markets know what can be expected and what should not be expected – it is not about aid to Greece,” Merkel told reporters after a meeting with European Parliament head Jerzy Buzek on Monday.

“Greece has not asked us for money. That means that there is no question of an urgent decision in the European Council about aid for Greece,” she said.

Widespread unease among German taxpayers could be seen in the Financial Times poll showing a hardening of opposition ahead of a key regional election on May 9.

Greek Prime Minister George Papandreou has warned that his government might be forced to turn to the International Monetary Fund.

Buried under debts of €300 billion, he has already ordered billions of euros of savings in seeking to slash a runaway public deficit that is close to 13 percent of national output – more than four times the limit allowed by the eurozone. But loans at lower rates and totalling €22 billion are still being sought from eurozone partners, with IMF top-ups, a European source said.

France said “new ideas” were required to close a yawning gap between the willingness of some eurozone partners to cough up and the need as expressed by Italy to ensure full solidarity.

Italian counterpart Franco Frattini said there was a “moral duty to intervene as soon as possible.”

Athens has officially only asked for help to fend off financial speculators, as it seeks to refinance more than €50 billion ($68 billion) of debt this year, including more than 20 billion by the end of May.

Greece is currently paying roughly twice the interest that Germany does to borrow money.

Barroso’s spokewoman stressed that her boss was doing “everything possible” to secure a deal this week, and that he remained “hopeful.” Berlin also faces a possible constitutional court challenge should its federal institutions engage in any bailout.

Merkel is often lampooned in Germany for indecision, but Der Spiegel said she was acting with a “resolve reminiscent of (Margaret) Thatcher,” the former British prime minister who secured a multi-billion-pound rebate for London in lieu of bumper EU aid to French farmers.

“The role of the Iron Lady won’t make her more popular in Brussels, but back home it will,” it added.