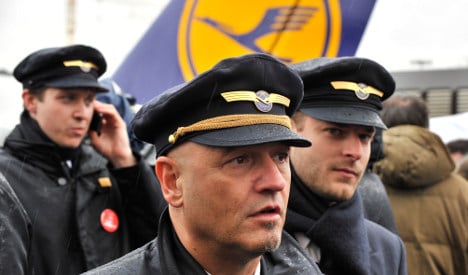 Pilots’ union Cockpit said Lufthansa had made an inadequate offer and announced a four-day strike between April 13 and 16. The pilots decided to wait until after the Easter holidays to avoid major disruptions for passengers.

Some 4,500 pilots from Lufthansa, Lufthansa Cargo and subsidiary Germanwings are expected to take part.

Meanwhile the airline’s head negotiator Roland Busch defended the offer for a 21-month pay freeze, saying it was appropriate to the circumstances and would protect their jobs until 2012.

The airline must currently avoid spending increases, he added.

In late February Cockpit called a first round of strikes for Lufthansa pilots, but after just one day a Frankfurt court stopped the industrial action.

The company had asked authorities to prevent the four-day strike from continuing, calling it “disproportionate.” The scheduled strike had been projected to cost Lufthansa up to €65 million, and the first day alone grounded almost half of the airline’s flights.

Like most airlines, the German flag carrier is still feeling the pinch of the global economic crisis, but Cockpit has said its members deserve a 6.4-percent pay raise and job guarantees.