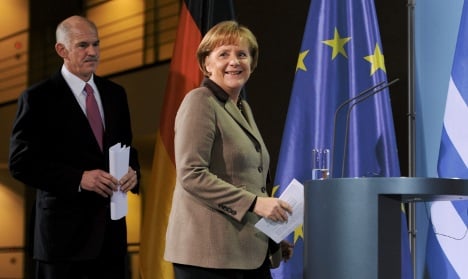 Merkel told Papandreou in a phone conversation on Sunday that the “EU was determined to undertake everything necessary to preserve the stability of the eurozone,” a statement said.

Merkel also “confirmed her support for Greek reforms,” while Papandreou “underlined that Greece did not need financial aid,” the statement added.

Greece has called on its European partners to put together a contingency plan in case it has difficulty refinancing its debt, but German officials including Merkel have recently indicated that Athens should consider borrowing money from the International Monetary Fund.

In an interview with German business daily Handelsblatt on Monday, EU Commission chief Jose Manuel Barroso called on Germany to commit to the EU plan.

“It is in the interest of Germany to ensure the stability of the European monetary union. I am therefore certain that Germany will make a constructive contribution to resolving the current crisis,” said Barroso.

But a poll published by the Financial Times on Monday showed 61 percent of Germans are opposed to the idea of their government helping Greece out of its debt crisis.

Only 20 percent of Germans are in favour of any aid to Greece but the heavily indebted country gets more support in fellow eurozone states Spain and Italy, where 45 percent and 40 percent back the idea.

The survey also showed deep opposition in Britain – which is not part of the euro currency area – where 56 percent are opposed to Greek aid while 21 percent support it.

On Saturday, Papandreou called upon EU leaders to back the plan when they meet in Brussels this Thursday and Friday to help calm the markets which have made it difficult for Greece to refinance this year some €50 billion of its more than €300 billion in debt.

“We are not demanding that anyone pay for our mistakes and our debts… but we are asking for political support against speculators and the chance to borrow at rates that allow us to breathe,” said the prime minister.

But in a radio interview on Sunday Merkel indicated she opposes EU leaders making a decision at their summit this week as Greece doesn’t need money at the moment.

“That’s why I advise against causing turbulence on the markets by raising false expectations about the European Council meeting this Thursday,” she said.

In the radio interview Merkel said Germany would not oppose the EU plan, whereby willing EU member states would make loans to Greece on a bilateral basis to get around EU law that prohibits a bailout.

But she also noted Greece could go to the IMF for help, an idea previously anathema to the 16 countries which use the euro as it would signal they could not properly manage their monetary union.

Finance Minister Wolfgang Schäuble also said Sunday that Greece doesn’t need help for the moment, and that under that under the EU’s stability pact “Greece should resolve the problem itself.”

Athens has put into place plans to hike taxes and slash spending which have been “well received” on the markets, Schäuble said on ZDF television.