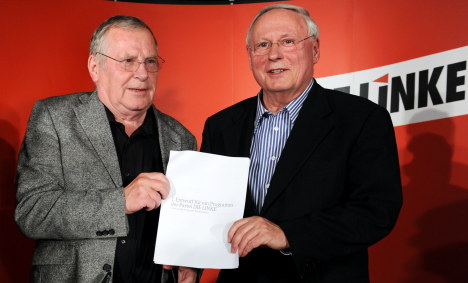 Representatives from a 16-member commission led by The Left party leaders Oskar Lafontaine and Lothar Bisky unanimously adopted the draft programme earlier in the week before presenting it in Berlin on Saturday. The completed platform will not be put to a vote until autumn next year.

Bisky said the coming debate of the party programme would help establish what “defines the core of The Left’s identity.” Fellow party head Lafontaine said the leftists would use the new platform to stake out the party’s ambition to govern – even at the federal level, under the right circumstances.

The new document outlines three principles meant to guide the party’s work, which include achieving a “society united in solidarity” and putting that goal before economic concerns.

The party’s immediate aims include guaranteeing the right to decent jobs, access to quality, tuition-free education and a fair tax system that takes pressure off of low- and middle-income earners.

The programme also recommends that the country’s power, telecommunications and railway companies be turned into state collectives, though Bisky denied the party would use East Germany’s political system as a model. The draft programme outlined the party’s support for voter referendums and political strikes, which are currently not allowed in Germany.

Hans-Peter Friedrich from the Bavarian sister party of Merkel’s Christian Democrats said the draft programme revealed the leftists’ “true face” and opposition to freedom and democracy in German society.

The Social Democratic Party’s general secretary Andrea Nahles described the document as “hodgepodge” of contradictory information. “You can’t make a state out of East German nostalgia and narrow-minded delusions of power,” she said.

But the Left Party saw the criticism as a sign the party is moving in the right direction. “If there were no outcry from our political opponents, then we’d have done something wrong,” Left Party deputy leader Klaus Ernst said.

The Left was founded by the union of the successor to the East German communist party and disgruntled western German trade unionists that had once supported the Social Democrats (SPD). Under the leadership of Lafontaine, once the head of the SPD, the hard-line socialist party has started to establish itself across western Germany.