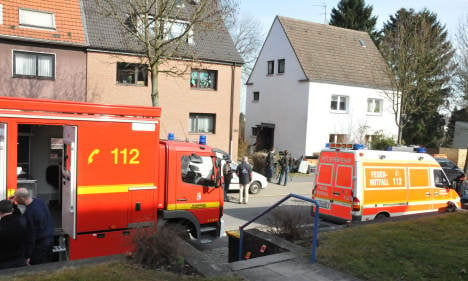 Mülheim’s fire department is on the scene. Photo: DPA

The three-month old monocled cobra, which belongs to a 19-year-old snake breeder, escaped during the night and was reported missing on Thursday. About finger-width in diameter, the potentially deadly serpent measures 30 centimetres long.

The city enlisted reptile experts from Düsseldorf’s fire department to search each room, as well as the two apartments beneath the owner’s home.

“The top-floor apartment has been completely gutted,” city spokesman Volker Wiebels said this weekend. “They assume the animal is still in the house and has hidden himself in a warm corner.”

Though the team removed all furniture, floorboards and wall coverings in the apartment, they have found no trace of the snake. “We’re putting down flour to let us see where the animal has wriggled around,” Wiebels said.

The city plans to keep looking, but the search is getting prohibitively expensive, and Wiebels estimated a total cost in the mid-to-high five-figure range.

“From a legal standpoint, it’s clear that the person who caused this, the owner of the snake, should pay for it,” Wiebels said. The young man visited his home on Saturday, but would not comment on the case.

Despite being evacuated from their apartments, his fellow residents have stayed calm. “I don’t hold a grudge against him,” the man’s neighbour said. “The main problem is that you’re allowed to have these animals as pets – they’re as dangerous as weapons.”

It’s not the first time the city’s fire department has been called on to catch a dangerous creature. They were faced with a similar case in 1997 involving a scorpion mother and her spawn.