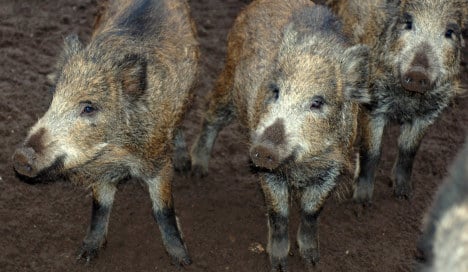 Which way to the Reeperbahn? Photo: DPA

One of the approximately dozen boars gained access to the office of a consulting company after breaking through a closed window, according to a police spokesperson.

After staff members evacuated the building, police tried and failed to contain the wayward swine before shooting him. The animal reportedly caused at least €15,000 in damage.

Seven other pigs paid a visit to a U-Bahn metro station in the Volksdorf area. One animal was hit by a train, though the cars remained on the tracks. That animal was shot, and the track’s power lines were switched off for more than an hour while six other boars roamed the station.

A similar incident occurred in January in Hamburg’s Ohlstedt district, when another loose animal derailed a metro train, according to a report published Saturday in the daily Bild.

On Friday, three other wild boars drowned after falling through the ice on a lake in Volksdorf, despite the Hamburg fire department’s rescue efforts. The dead animals were later retrieved from the water.

“Wild boars have proliferated on the outskirts of the city,” the fire department’s wildlife expert Olaf Niess told Bild. “We’ll be seeing the animals in Hamburg more often now.”