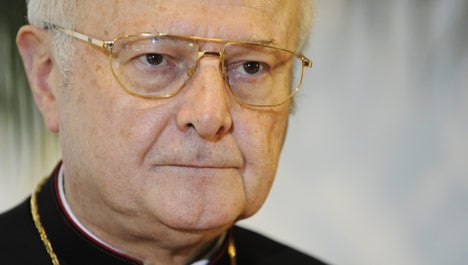 The letter is “at the same time a warning to us,” Zollitsch said in a statement, and “is valid for the entire Church.”

Germany’s Catholic Church has been thrown into crisis in recent weeks as hundreds of people have come forward alleging they were abused as minors by priests between the 1950s and 1980s.

Zollitsch called it “a Church scandal in several regions and a scandal for the Church in Germany” and lauded the pope, who is German, for speaking out.

“When a difficult truth is expressed publicly, it seems painful, but it is also liberating,” he said.

Zollitsch, who heads the German Catholic Church, has been accused of having covered up for a predator priest by failing to notify prosecutors by a victim of sexual abuse.

In a report to be broadcast Monday on SWR public television, a victim of sexual abuse claims Zollitsch “concealed and covered up” for a priest who preyed upon at least 17 children.

According to information released by the station in advance the priest, named as Franz B. was suspected of sexually abusing children in the Bavarian parish of Oberhamersbach. But he “was sent into retirement in 1991 with the support of Robert Zollitsch.”

At the time Zollitsch was in charge of personnel matters in the Bavarian diocese of Fribourg. Prosecutors learned of the suspicions against the priest only in 1995 when a victim filed a complaint.

However, a spokesman for the Fribourg diocese, Robert Eberle, said Church officials had “acted in a consistent manner and very rapidly”, forcing the priest into retirement even before the accusations against him were proven. Aware that prosecutors were closing in on him, Franz B. committed suicide in 1995.

The archbishop apologised to the 17 victims who had come forward by November 1995, said Eberle.

According to the television report, Zollitsch personally informed Franz B. of the rumours circulating about him and forced him to retire and stay away from youths.

The report said Franz B. sexually abused at least 17 children and adolescents between 1968 and 1991, mostly choir members.