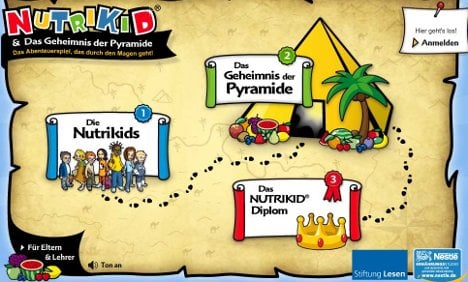 The organisation Stiftung Lesen teamed up with Swiss firm Nestlé to create Nutrikid & Das Geheimnis der Pyramide, or “Nutrikid & the Secret of the Pyramids,” distributing it to schools across the nation.

The game directs young players on a treasure hunt through ancient pyramids as they solve riddles about good nutrition. While the school version of the program does not ask for children’s personal data, when children go home and play on their family PCs, the online version does.

Now parents have become concerned that when their children play the game at nutrikid.de, the company requires them to provide personal information – name, email address, gender, birth date, and a nickname. Meanwhile the Nestlé logo crops up throughout the game.

“One trusts the integrity of the reading foundation, as the school does, and clicks on the approval button,” one mother said.

The head of Berlin’s state parents’ committee André Schindler said there was no reason for the game to require so much information.

“This data doesn’t not belong on the internet,” he said.

Stiftung Lesen was apparently not initially aware that Nestlé was collecting the data online, and later assured that it was “only for this project.”

Spokesperson Christoph Schäfer also said that without support from the food company such projects would not be possible.

Meanwhile Nestlé spokesperson Alexander Antonoff said the company would review the game, but assured that the data would not be used for advertising purposes and was deleted after the game. Antonoff also said the program would now only require a nickname for registration.

Education and Science Workers’ Union (GEW) said Nutrikid is an example of systematic advertising within schools.

Data protection officials in Darmstadt near Nestlé’s German headquarters have said they plan to look into the reports.