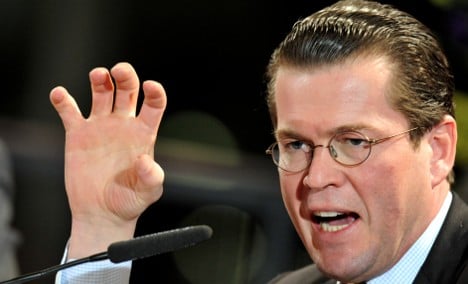 Parliamentarians on the commission said Guttenberg made contradictory statements about his knowledge of the events surround the bombardment of two fuel trucks near the northern Afghan city of Kunduz in September 2009.

Following the strike that killed score of civilians, Guttenberg, who took his post in late October 2009, vowed a thorough investigation into the accusations that his predecessors withheld information about the victims. But further revelations have put Guttenberg under increasing political pressure for his initial assessment of the incident.

While Guttenberg has said he did not have access to information seen by his predecessor Franz-Josef Jung when he declared the bombardment “militarily appropriate,” media reports have said that he in fact had a report by the International Red Cross that deemed the air strike to be against international law and responsible for the deaths of dozens of civilians.

“We know that the files he says were allegedly withheld did not contain any facts that could have led him to another assessment,” he said.

On Thursday afternoon the parliamentary committee is scheduled to interview ex-Bundeswehr Chief of Staff General Wolfgang Schneiderhan and senior Defence Ministry official Peter Wichert, who both stepped down over the affair. The two are expected to explain what information they provided for Guttenberg.

Arnold said that it was not the two men’s jobs to give the defence minister every single file on the incident, but only those that were necessary for assessment.

“For a minister it’s all a bit cloudy,” he told broadcaster Bayerische Rundfunk. “First he says the files were withheld, then he says they were misappropriated. Now he says it wasn’t done deliberately.”

“It is not insignificant when one lets his two most important employees go, and particularly not if one gives totally different assessments on such a delicate matter,” he added.

The parliamentary inquiry is attempting to clarify how so many civilians could have been killed on September 4, 2009 when German Colonel Georg Klein ordered the bombardment of two fuel tanker trucks that had been hijacked by the Taliban.

They are investigating whether Klein adhered to proper rules of engagement and if there was a subsequent cover up in the Defence Ministry.

Former Defence Minister Franz Josef Jung, who was in office when the controversial air strike occurred, resigned from his new position as labour minister over the allegations that he hid evidence that civilians had been killed ahead of federal elections.