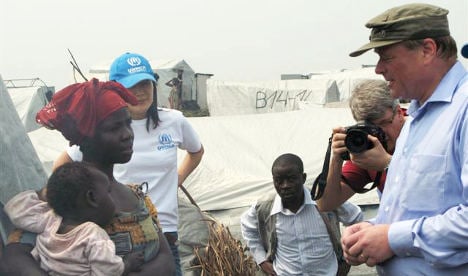 In a slightly odd opinion piece written as a humorous five-part play for the New York Times last November, U2 singer and aid campaigner Bono said Chancellor Angela Merkel could be a “game changer” when it came to alleviating global poverty.

“Maybe it’s her background growing up in East Germany … She uses this precise, unemotional language, but then a deep sense of fairness and, I guess, empathy comes through,” Bono wrote.

A month later, after Germany’s federal budget showed it would fall short of the international covenant to spend 0.51 percent of GDP on foreign aid, Bono’s co-campaigner, Bob Geldof, blasted Merkel for having “broken her promise to the world’s poorest people.”

The contrast was indicative of the mixed signals Germany has been giving lately on development aid. Merkel’s heart is in the right place, most observers say, though at the moment her government is failing to meet expectations.

Her rugby-loving, somewhat Rambo-esque development minister, Dirk Niebel, is harder to read. Scheduled to present the federal cabinet next week with his proposals for restructuring Germany’s foreign aid programme, Niebel is winning applause for his plan to make aid more efficient by amalgamating the three German agencies that deliver it.

Backing away from aid targets?

But the former Bundeswehr paratrooper and member of the pro-business Free Democrats (FDP) has also been condemned for his equivocal stance on the long-promised goal of spending 0.7 percent of German GDP on foreign aid by 2015.

And that has put him at the centre of a national debate about how much Germany should be spending on the world’s poorest and how best to make the money count.

“Angela Merkel has an international reputation for keeping promises … and already Germany is not delivering enough to live up to those promises,” said Tobias Kahler, the director in Germany of the One campaign, an anti-poverty advocacy group founded by Bono, Geldof and others.

“For two years, Merkel was really strong but since then the budget really has not matched up to it. We’re really disappointed about this,” he told The Local.

Germany will spend €6.1 billion this year on development aid – an increase of €250 million on 2009 but some €3.5 billion short of the earlier target of 0.51 percent of GDP. Observers agree that with the federal budget €80 billion in deficit, increases in aid spending are unlikely.

Niebel has pointedly expressed doubt about whether Germany can and should stick to its 2005 commitment to spend 0.7 percent of its GDP on foreign aid by 2015.

“I think the chancellor is keen,” said Ulrich Post, chairman of VENRO, the umbrella organisation of development NGOs in Germany. “Whenever Niebel tries to withdraw these promises, she declares that she wants to stick to them. But the federal budget is in trouble and the Ministry of Finance won’t agree to a major increase.”

Post said the government would probably meet the 0.7 percent figure by fiddling with the numbers rather than putting in more money. “They will change the way the statistics are calculated so that, officially, they will keep to the target,” he said.

One thing aid experts agree on is that, although Niebel’s combative style and history of scepticism towards development aid has invited suspicion of his motives, the plan to combine the government aid agencies and bring them closer to the ministry is necessary and overdue one.

His predecessor – and arguably his antithesis – the old guard left-winger Heidemarie Wieczorek-Zeul from the Social Democrats, wanted to do the same thing but failed to achieve it during her long tenure.

The three major agencies – the GTZ, the DED and InWent – are tripping over each other and making it harder for partners in other countries to co-ordinate with Germany. Combining them would free up about 1,300 employees to work on better delivering aid.

“(The agencies) are spending a hell of a lot of time basically co-ordinating each other … so streamlining them would really give you more manpower to deliver better development assistance,” said One’s Kahler.

The agencies themselves agree. Angela Krug, spokeswoman for the DED, said her colleagues had welcomed the reform plans.

“They have asked our opinion and involved us in the discussions, which is something good and also something new. It will help us fine-tune our programs … if we are just one organisation, it would be much more effective. Our partner organisations overseas often don’t know who to talk to.”

Beyond that, there is a debate about how exactly Germany should spend its money. Compared with other leading industrialised nations, Germany ranks about in the middle, Kahler says. Both he and VENRO’s Post said the way Germany was targeting its aid spending was for most part right.

Not everyone agrees. Rupert Neudeck, a long-time activist who has founded the Bonn Appeal to change the direction of aid in Africa, said Germany had been on the wrong track for decades.

The Bonn Appeal, backed by former senior politicians and development bureaucrats, favours “micro-credits” – small loans for specific purposes such as establishing businesses that create jobs. It regards the 0.7 of GDP target as a “false premise” that more money means better development.

“We are sending thousands of consultants and giving them high-ranking jobs … but this is not changing anything,” said Neudeck. “We are not supposed to be changing these countries. We are not nation-building. They have to do that themselves. But sometimes, because of super-activism, we have hindered intentions and activities in these countries.”

It is a debate that is yet to play out. A key question will be how much Niebel can realistically get done. Observers agree he is eager to get things done and he is learning quickly but he does not yet seem to have a clear and concrete sense of what he wants to achieve.

“He is still looking for a strategy and my impression is he has not found it yet,” Post said.