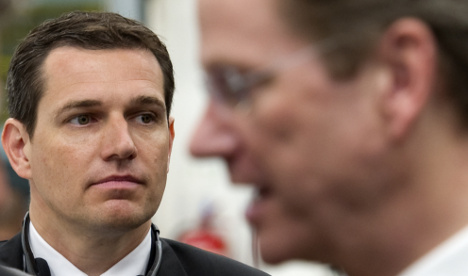 Justice Minister Leutheusser-Schnarrenberger, a member of Westerwelle’s own Free Democrats party, told the Neue Osnabrücker Zeitung it was “undeniably the case” that different standards had been applied to Westerwelle because he was gay.

Questions have been raised about the role of Westerwelle’s partner Michael Mronz on an official government trip last week to South America. Mronz, an event manager who specialises in sporting events, had visited charitable organisations as part of his role with philanthropic groups, Westerwelle said.

Critics noted that one of the countries visited, Brazil, is hosting the Football World Cup in 2014 and the Olympic Games in 2016 and that Mronz could have gained access to useful business contacts via Westerwelle’s connections.

But Leutheusser-Schnarrenberger dismissed that possibility.

“I have never heard questions asked about the profession of wives of ministers travelling with (their husbands),” she said. “With Westerwelle’s partner, that is a huge issue.”

Westerwelle has also been accused of taking his brother on his official trips, as well as businessmen close to his pro-business FDP party, who then use the occasions to secure deals.

Westerwelle recently hit back at the charges as “slander.”

“During the (South America) trip, Michael Mronz visited several social establishments and gave private donations to projects that benefit children. He has not taken part in any political discussions but he went along to help children in the poor areas after the earthquake in Chile or in Brazil,” he said.