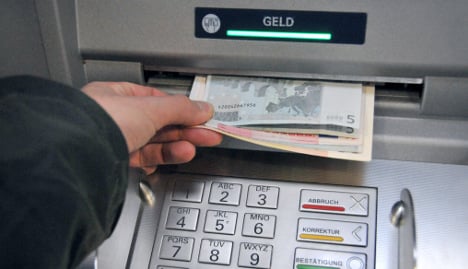 Hans-Michael Goldmann, the chairman of the Bundestag’s consumer protection committee, told the Saarbrücker Zeitung he wanted to move against what he considered unjustifiably high fees.

German customers are charged unusually high fees by international standards when they use an ATM belonging to a bank that does not have a deal with the customer’s own financial institution.

“We are aiming for an agreement with banks that they charge fees only within a specific range of between €5 and €7,” he said.

The costs associated with linking banks’ automatic teller machine networks did not justify the high fees, he said.

“The consumer protection committee sees itself as the driving force in getting the responsible minister to act against the high ATM fees,” he said.

The committee plans to discuss the issue Wednesday in a hearing with bank representatives. An investigation by financial services firm FMH found that fees for customers using non-affiliated ATMs had climbed in the past six months by 13 percent to average €5.64, though some banks were charging €10.