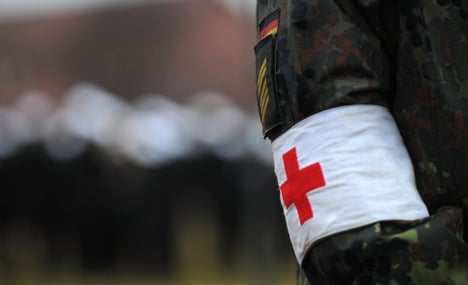 Just ahead of presenting his final annual report, Robbe told daily Bild that more than 120 doctors had resigned recently, leaving an overall shortage of some 600 military physicians.

“The medical inspector is obviously not up to his task,” he told the paper.

Medical deficits will be among the report’s main points, Robbe said, but a shortage of weaponry and vehicles are also on the list, Bild reported. Lack of funding should not be an excuse for equipment shortages because this is directly related to soldiers’ safety – a situation he said was “not optimal.”

“Something that worries me, and I say it in all clarity, are the structure problems in the Bundeswehr,” he said.

The Social Democrat also told ARD that due to slow progress some of the same problems listed in his first report five years ago remain on the list.

Robbe’s term as parliament’s military commissioner ends on May 12, when he will be succeeded by Free Democratic politician Hellmut Königshaus.

Last month Robbe addressed a hazing scandal in the German army, which snowballed into more soldiers blowing the whistle on ugly rites of passage.

The affair was revealed when a young soldier who trained at the camp in Mittenwald, Bavaria came forward to describe hazing that included recruits being forced to drink alcohol until they were sick, eat raw pig liver, and conduct climbing exercises in the nude before their fellow soldiers.